The Face of Grief Before and After the Autism Spectrum

My husband Cedric and I used to joke we should have known from the beginning our extremely introverted daughter preferred not to be bothered with the rest of the world. Despite trying to arrive early at 35 weeks, at 42 weeks labor was induced and Jordan arrived. I remember the nurse saying, “It’s a girl, and she is beautiful!” Jordan’s smile warmed the hearts of all around her. When she was five months old, I took her to a K-Mart Photography Studio to have her first formal portrait taken. While I entertained her so we could get a good picture, a small crowd gathered to watch the show. But by age three a change occurred. While at the photo studio, Jordan seemed fearful of the flashing lights. She did not smile at all during the session. In fact, she became terrified of a litany of things – falling leaves and snow touching her, the blacktop pavement at the pre-school, insects (flies in particular), popping balloons and the “Scream” character Halloween costume. She could not tolerate the “scary” section of the Halloween store. While eight months pregnant with the twins, her “blind” fear propelled her to release my hand, and without looking run across a street to escape a fly. She also ran from her classroom and yanked on the elementary school door to get out because she saw a fly. The only person she held a meaningful conversation with was me. A child psychologist told me children usually outgrow fears and phobias. I also attributed her introversion to the fact both my husband and I were quiet individuals. So at age twelve, her reaction of silence did not surprise me when I told her and my five-year-old twins in January 2007 that my husband was diagnosed with cancer of the urethra, which quickly spread to the lymph nodes. By August 2007, there was metastasis to the bone. 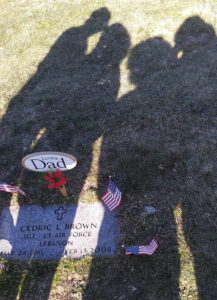 A Child Life Specialist advised me no matter how difficult, in order to maintain trust, always be open and honest with the girls. While the twins cried at times, Jordan would just keeping asking, “Is dad okay?” I responded, “He has cancer, but is getting medicine to treat it. He is okay right now.” Simultaneously we had recently moved, and Jordan was attending the 7th grade in a new school district. Her grades went from A’s at the prior school to D’s. I came home one day and found her in a fetal position. She was being bullied at school. I contacted a pediatric nurse practitioner friend who referred me to a social worker. She became part of a weekly group with other girls who had been bullied. So, while taking my husband for chemotherapy during the day, in the evening the twins and I slept in a waiting room while Jordan participated in her group session. As my husband’s health declined, I converted our family room into a “hospital suite.” We began hospice in November 2007. One day, while the girls were in school my husband was admitted to the hospital for management of intractable pain. When they got home, I told them what happened. Staring at computer screen with mouse in hand, Jordan sighed and said, “Thank God. I need a break.” She never looked up from the computer. Once Cedric became unresponsive, I knew his death was imminent. I encouraged the twins to continue to play in the family room. Jordan stood outside the room saying, “I want to go in, but it’s scary.” I responded, “You don’t have to go in if you don’t want to, but Dad wanted to be home so he can hear your voice. He can still hear everything going on. Hearing you guys laugh makes him very happy.” She smiled and we hugged. Forty-eight hours later Cedric passed away in February 2008. The first time I saw Jordan publicly cry was at the funeral.

Thirty-six days later, on his 47th birthday, the girls and I visited the cemetery for the first time. Both twins went to the gravesite. Jordan did not get out of the car. Two weeks after Cedric’s death, Jordan wrote me a six-page letter discussing the emergence of an imaginary male friend named Jaime. Since Jaime appeared in February, Jordan said, “Although his real birthday was in February, I changed it to May, because February is such a sad month.” Jordan then became a social recluse. She disclosed she had no friends in high school. Suspecting some delayed grieving, I took Jordan to see a licensed psychologist. After an initial evaluation, she stated, “I think your daughter is grieving, but I also think she has Asperger’s Syndrome. Has anyone ever mentioned this to you?” “No,” I responded. “What is it?” She gave me the book entitled Asperger’s and Girls featuring Tony Atwood, Temple Grandin and seven more experts. I read it that night, while Jordan went to websites the psychologist recommended. “My God,” I thought. “This is Jordan since age three!” Jordan was relieved. “I always knew I was different. Now I know I am not alone. I am an Aspie!” The psychologist referred us to a Cognitive Behavioral Therapy Group where Jordan received counseling from grades 9 to 12.

Over the years Jordan slowly left the van and joined us at the gravesite on her Dad’s birthday and all major holidays. At times, she reminds me to get to the cemetery “to see Dad.” She still does not say a lot. Six months ago when she pondered asking for permission for a lip piercing, she told me “last night I dreamt about Dad talking to me about getting another piercing. He told me don’t do it. So I don’t want it.” She smiled. When I did asked if she wanted to reflect and share her memories of her dad’s illness and death for this article, she hesitated; I gave her permission to say “no,” and she responded, “Okay, not today.”

Thinking back, I now understand how Jordan could verbalize needing a “break” when my husband was hospitalized. Not having an Autism Spectrum Disorder (ASD) diagnosis at the time, I simply recognized and acknowledged the stress she was under. If I had responded with the cliché, “So Jordan, tell me how you really feel,” she probably would have responded “Mom, I just told you.” Whether on the spectrum or neurotypical, no one is prepared for the untimely death of a husband and father. I believe on some level, everyone’s “unique abilities” equip you to travel this journey with a loved one. Jordan is now 21 years old and is graduating from college. The twins are juniors in high school. My husband would be so proud.

AHRC NYC Program Fuels Desire to Help Others Pursue Higher Education Meghan Mattei models herself after pioneers such as Erin Brockovich and Temple Grandin. “I want to be a self-advocate […]

Increase Neuro-Inclusive Housing in Your Community: Here’s How!

For most people with autism, housing is not affordable. It is a myth that Medicaid pays for housing (unless the individual lives in an institutional setting). If a person with […]

Throughout Daniel’s life I have advocated for my intellectually challenged son on the autistic spectrum. My journey began early in Daniel’s life, as the parent of an adopted infant from […]