There’s something on my mind lately; a knot I’ve been trying to untangle. I thought maybe we could talk about it. Stimming. You know, stimming? The way my 12-year old son Jack jumps and hops and grunts at least, oh, I don’t know, fifty times a day?

Stimming is short for self-stimulation, or the repetition of certain movements, sounds, or behaviors like rocking, or hand-flapping, or head-banging, or singing A-B-C-D-E-F-G four hundred and ninety-two times in an hour.

(Jack used to do that. The singing thing. It drove me nuts.) 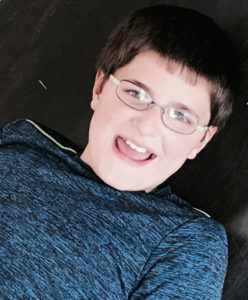 It’s considered one of the hallmarks of autism spectrum disorder, although everyone stims occasionally. Some of us run for miles and miles a day, or we twirl our hair, or chew gum, or rub a soft cozy blanket between our fingers while we watch Netflix.

If you were to ask 7-year old Henry what it means when we say his older brother Jack has autism, he would simply say, “Oh, it’s because he jumps around a lot.”

And he does. He jumps around a lot. Like, a lot a lot.

His jumping is as familiar to me as my own breathing. It’s the first thing I hear in the morning before my eyes have even opened, and the last sound I hear before he finally settles into bed at night. We call it his zoomies.

He didn’t always jump. When he was a toddler, his movements were more subtle, and quiet.

He would trace the same tile over and over with his pointer finger, or he’d line all of his Little People figures up in a row on the windowsill, stare at them, and then slowly take them down, one by one, only to line them all up again.

For a while he rubbed hand soap all over the walls, and then he clicked the doors open and shut a billion times. Then we had the singing.

And now, he jumps. He puts two fingers in his mouth and gallops and leaps around the house, or the grocery store, or when we walk down the aisle to choose our pew at church.

If we’re somewhere that he has to sit for a long period of time and he can’t get up—like on an airplane or squashed into a seat at the movies, he’ll bend over at the waist quickly one, two, three times in a row.

Last year we went to a wedding and this huge, gorgeous wedding cake was set out in the middle of the room for almost the entire reception. Jack gyrated and hopped around that thing for hours while Joe and I looked on, horrified. I just knew that at any moment, that cake was going to go crashing to the floor, but no matter how many times we drew him away, he bounced right back like a spectrum moth to the frosted flame.

“We’ve got to get him to stop doing this,” I said to my husband Joe on the ride home.

And now, a year later, we haven’t made much progress.

See, the thing, Jack is completely unreachable when he stims. It’s as if he can’t hear you at all. In those few seconds of deregulation, he is lost to us. He doesn’t even seem to know he’s doing it.

“Jack, try to quiet your body, can you stay still?”

And yet, I refuse to believe stimming is bad for him. I think he needs it. I think it’s a way for him to disappear when the lights and sounds and smells become too much for him to bear. It gives his brain a chance to recharge so it can accept and process the smell of pizza in the restaurant and the sound of falling pins in the bowling alley.

And when words fail him, it’s a good way for me to take his emotional temperature; to gauge how fast his brain his racing and his heart is beating, simply by watching how much he’s jumping.

I am constantly trying to understand what stimming feels like. The closest I can come to describing it is all of a sudden, it’s as though he’s stumbled upon an ant hill, and thousands upon thousands of ants start a steady, yet disorganized march up and down his legs and arms and tummy. They tickle him with their tiny feet, and he jumps suddenly to try and shake himself free of their miniature stampede.

That’s what I imagine, anyway.

Or maybe it’s like a song in his head that only he can hear, and he cannot rest until he performs his own private dance to the silent notes.

It is the symphony of my day, the orchestra of my background, this music that plays within my boy. Like the moon to the tide’s cool waters, again and again he surrenders to the quiet retreat of his heart’s song.

Who am I to take that away from him?

A long time ago I got used to looking at everything through a continually shifting spectrum lens, as a way to decide what to change about this boy, and what to keep—what to let him have, and what to alter, to remove, to take away and replace. It is exhausting and frustrating.

It’s the first thing people notice about him. It’s the reason kids stare and grown-ups drop their eyes when we’re in the mall.

I don’t care if he’s different. I don’t care one tiny-little-marching-ant-bit if people stare or point or giggle or chatter.

He cares about the proverbial sign even though he would have a hard time explaining what the word proverbial means.

He cares that he’s different. He cares very much.

The other day we had to pick out new glasses. After a busy school day, I knew it would be hard for him to focus long enough to try on new frames and to sit still while the doctor measures the lenses.

Driving in the car together, it occurred to me that maybe I’m just over thinking this stimming thing. Maybe it doesn’t have to be so hard. Maybe there’s a way to quiet the music and still the ants without upsetting the tender balance of autism and boy.

“What. What for this idea.”

“Before we go in to get your glasses, let’s do some jumping in the parking lot. To get your zoomies out.”

So I parked in a spot that was away from all the other cars. We both unbuckled our seat belts and opened the door. And underneath the dusky autumn sky, we looked at one another. He smiled a slow smile, and together, we jumped.