As a single mom of a nine-year-old autistic son, I would never have imagined my son being placed in a residential school setting. All of the autism characteristics were there at the tender age of two. Through early intervention services and then my son being placed in a New York City District 75 program, they tried their best to help my son with ADL skills and control his behavior that was aggressive at times. As my son got older, his behavior began to become more aggressive towards me, his siblings, and school staff. Since he is non-verbal, it’s difficult for him to get his wants and needs met, therefore he could not control his frustration. When you receive more than one phone call during a school week to pick up your child because staff cannot control him, it’s absolutely inconceivable. My thoughts were, they should have skilled staff who know how to work with special needs children. In discussion at the time with the principal of his school, they were short staffed and could not accommodate his needs and thought a residential setting would be more appropriate. Not only did his behavior in school become more aggressive, but at home as well. 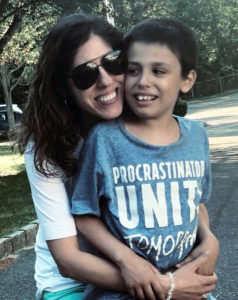 I am his voice, he is my heart

Having two other children, it was extremely difficult to manage my son with his meltdowns that sometimes consisted of scratching, biting, and pulling hair. In times of despair, residential schooling seemed to be the only beneficial solution for my son as well as for my family.

Fast forward seven months since my son’s new school placement: his behavior has improved, and he is under 24-hour care by skilled staff. Sometimes the most difficult, heart-wrenching decision you make in life, turns out to be the best one under your circumstances. For my son to grow up to be an integral part of society, where he is accepted in the community despite his disability, is wonderful. Parents, guardians, and caregivers, who are raising a child with autism have an inner strength that keeps them going. If residential schooling crosses their mind, it doesn’t mean they become less of a parent or have given up. Everyone’s situation is different, which is why a decision like this one should be made with thoughtful consideration.

I love my son dearly, and he and my two other children are the most important people in my life. My goal for my son is to see him flourish from a boy into young adulthood, acquire independent living skills, and be accepted as part of a society that, itself, needs to learn the meaning of acceptance and the incomparable joy of learning from individuals who are differently-abled, yet so amazingly gifted. As a parent, you learn a lot from your children. As a special needs parent, you take a step back, and try to see the world through their eyes.