A Practice Run for Air Travel

Britney Lopez would not let go of her tablet before going through security at Newark Liberty International Airport as part of AHRC New York City’s Wings for All® event.

Maria Aviles, Britney’s mother, expected this would be as far as her daughter would go during a dress rehearsal for air travel on Saturday, May 18. But with a little coaxing and patience, Britney got through security and smiled with her tablet in hand as she boarded the United Airlines jet with her family. Britney, a 16-year-old with autism spectrum disorder (ASD) who attends AHRC Middle/High School, sat calmly on the plane tending to her tablet. 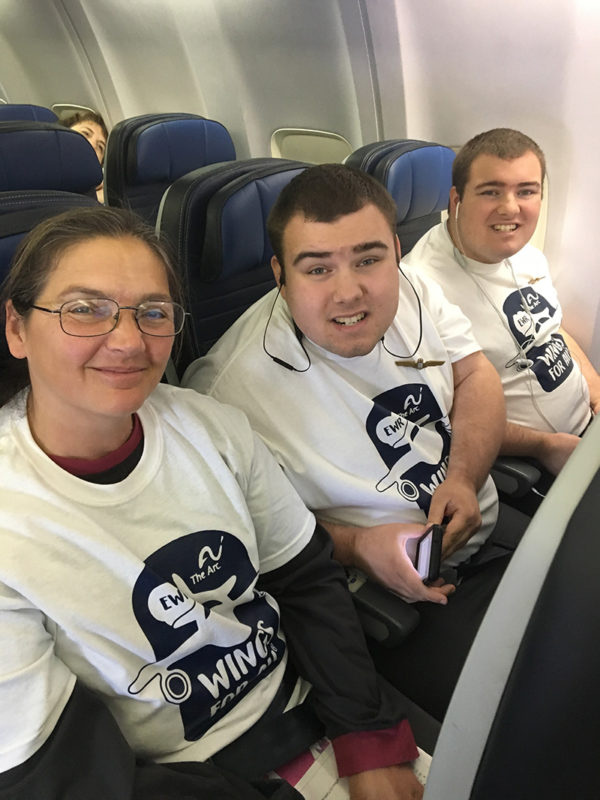 Joanne Furstman with twins Teddy and Nicky settled into their seats

Nearly 30 families participated in Wings for All®, hosted by AHRC NYC, The Arc, United Airlines and the Transportation Security Administration. Many parents admitted being nervous, not sure what to expect. But United’s employees went out of their way to ensure this would be a smooth flight, even though the plane never left the gate. United volunteers cheered young passengers and their families as they boarded the plane. This was AHRC NYC’s first Wings for All® in New Jersey. New Jersey has the highest rate of autism with one in 34 children; the national rate is one in 59.

Parents of young and adult children with ASD and other developmental disabilities have numerous concerns about traveling on a plane. How will their child react to the airport lights, crowds, and waiting in line? Will they be comfortable with airport security officers talking to or touching them? How will the engine noise affect their child?

United Captain Mike Neff met passengers as they waited at the gate. Once on board, he reassured Tom Wu and his wife, Zoe Zhang, that their son Eason, two- and-a-half-years-old, who was crying, would be OK. Eason calmed down once his parents showed a video on a phone and sang along.

Wings for Autism®/Wings for All® also gives airport, airline, TSA professionals and other personnel the opportunity to observe, interact and deliver their services to people with disabilities in a structured, learning environment.

“Partnerships like this can remove barriers to travel for people with autism and other developmental disabilities and their families,” said Marco Damiani, CEO of AHRC NYC. “This practice run makes a huge difference. We are empowering families, while educating and sensitizing airport personnel to the unique needs of people with developmental disabilities and their families.”

John E. Goodson, Assistant Director, Educational Services & Program Development for AHRC NYC, has seen the impact the programs have on families, having coordinated seven Wings for Autism®/Wings for All® events. “It’s rewarding when you see families immediately book that trip they always wanted to,” John said. “They become an airline’s loyalist for life. They know this airline will support them.”

While this was the first time many of the young passengers had been on a plane, they were all smiles as the flight attendants came around with snacks and beverages.

“Every customer deserves to enjoy and be comfortable throughout their travel experience and working with The Arc helps us ensure that thousands of families across the country feel welcome when they travel with United Airlines,” Jill Kaplan, United’s President of New York and New Jersey. “We are thrilled to bring this opportunity to Newark Liberty International Airport, our New York/New Jersey hub.”

Maria Aviles was thrilled with the experience. “Britney did awesome, so we’re going to fly to Disney! I’m excited,” she said. “She liked it so much she didn’t want to get off the plane.”

Five Tips for Traveling by Airplane with Kids with Autism

As September begins and we settle into our lives, it’s clear that the summer has come to an end. We are getting our kids back to school and starting to […]

Although traditionally understood as a childhood condition, autism is a lifelong disorder that presents in both children and adults. Many of the children with this disorder who were born during […]

Temple Grandin has been at the forefront of autism awareness for the past 50 years. She has seen autism unfold from an unknown to a much better recognized diagnosis, yet she is keenly aware that […]

The Camouflage of Autistic Women

Women are diagnosed with autism 2-3 times less often than men. However, studies indicate that the number of unreported cases of women with autism is much higher than previously thought. […]