In the late 1990s, evidence-based research made it clear that autism was heritable and younger siblings of kids with ASD were more likely to become diagnosed themselves.

This was a tremendous breakthrough but led to further questions about how to better understand autism recurrence and features in these younger siblings and improve diagnoses and treatments. To seek answers, autism advocacy and research groups organized a group of researchers that eventually became the Baby Siblings Research Consortium (BSRC) to work collaboratively on projects that needed hundreds of families to participate and provide valuable data. 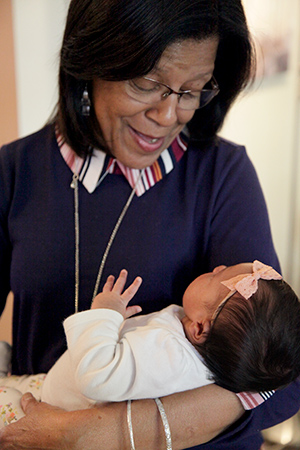 A grandmother holding her new granddaughter

Because these younger siblings could be studied from birth, this research also allowed better insight into the very earliest signs and features of autism: lack of response to name, lack of gestures, and poor eye contact, to name a few. These signs can be observed from as early as six months of age. In 2011, the BSRC combined their data and showed that the recurrence in younger siblings of those on the spectrum was 15x that of the general population (Ozonoff et al., 2011). One in five children who had an older sibling with autism would go on to receive a diagnosis themselves.

Fast forward to 2021. Those “baby siblings” are babies no more: They are in their 20s and 30s and having babies of their own. Parents who were worried about the signs and symptoms of ASD in their children years ago are now turning their attention to their grandchildren. Of course, families are complex in many ways, and these grandparents can be in-laws, parents, and even step-grandparents. This complexity means that the approach used to understand the first generation of siblings may need to be adjusted to understand this next generation – or “Next Gen” – siblings.

In 2015, Natasha Marrus, MD, from Washington University School of Medicine investigated whether the nieces and nephews of those diagnosed with autism in the 1990s and 2000s had a greater likelihood of a diagnosis. Specifically, the question was: Are those siblings without an autism diagnosis more likely to have a child with autism themselves? To study this, her research group used a large database in Sweden and found that, in fact, yes, there was a higher recurrence rate in the nieces and nephews of those with a diagnosis. Furthermore, this recurrence was higher in children whose mother had a sibling on the spectrum compared to those who had a father with a sibling on the spectrum (Bai et al., 2020). While intriguing, these results need to be replicated and extended to better understand how different generations of a family play a role in autism diagnosis, what those early signs and features are, and what predicts a diagnosis in the “Next Gen.”

This led the Autism Science Foundation to fund the newly launched ‘Next Gen Sibs’ research project to establish a future collaborative network that will help in identification, evaluation, and possible diagnosis and intervention for this next generation. ASF is initially funding two sites – one at Emory University and one at the University of California at Los Angeles – to track down these infant siblings from the 1990s who are now thinking of having children or already have children of their own. Researchers will talk to them individually or in groups to find out their concerns, what their research questions are, and how their childhood experiences have shaped their impression of an autism diagnosis. Because siblings without an autism diagnosis may show other challenges (Messinger et al., 2013), they might also have what is known as the “broader autism phenotype” without a diagnosis, or psychiatric comorbidity like ADHD (Miller et al., 2019). Right now, there is very little research on this group, and the first step is working directly with parents and grandparents to collaborate on a research project that will help answer questions around recurrence and early signs of autism in children, grandchildren, nieces, and nephews.

This research is aimed at identifying these children as early as birth to better understand their early signs of ASD for better detection, diagnosis, and facilitation into specific intervention settings.

Dr. Alyicia Halladay is the Chief Science Officer at the Autism Science Foundation. If you are a parent of an autistic adult and sibling older than 18, a sibling yourself, or married to a sibling of someone with ASD and are interested in sharing your thoughts and ideas on this research question, please contact Dr. Halladay at ahalladay@autismsciencefoundation.org.

The introduction of visual supports can often augment spoken language comprehension for learners who are minimally verbal. For example, when directing a learner to put a box into a bag, […]

Promoting Inclusivity in the Telehealth Movement

The emergency department (ED) is often a chaotic, loud, and, frankly, frightening place. Patients may be yelling; monitors and alarms are continuously sounding off; staff are hurrying around; police officers […]