Despite the advancement in autism research, one of the challenges that researchers still face today is engaging low-income, racial/ethnic minority, and non-English speaking families. Underresourced families who work multiple jobs have less time to participate in research; some families do not have access to transportation. Besides the financial reasons, it is also important to understand the cultural factors that can act as barriers to research participation for different groups.

For example, African Americans, who have experienced history of research abuse, are more likely than Caucasians to distrust the academic community (Corbie-Smith et al., 2002); Korean Americans, the majority of whom are first-generation immigrants, are excluded from most autism studies due to a lack of research offered in Korean; Latino families may hesitate to enroll in studies due to stigma associated with autism (Zuckerman et al., 2014). 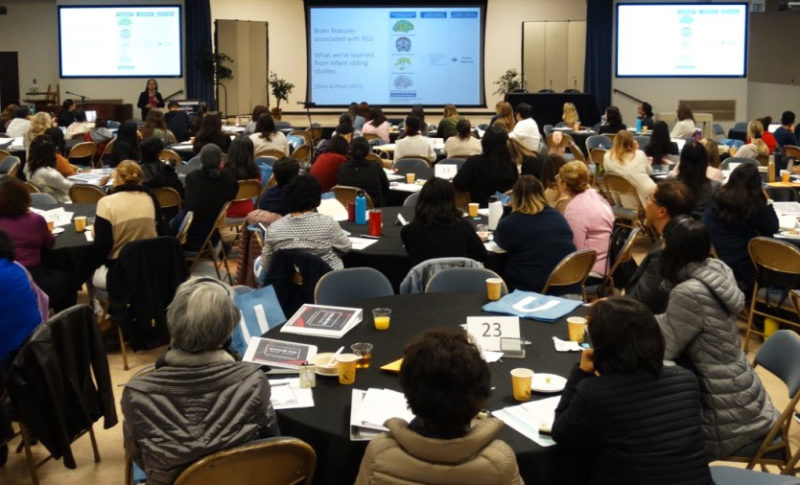 To bridge the gap between research and community, autism researchers across the nation have partnered with their local communities. This team, called the AIR-B Network (Autism Intervention Research Network on Behavioral Health; Principal Investigator: Connie Kasari, PhD), consists of UCLA, UC Davis, University of Pennsylvania, University of Rochester, Drexel University, and each site’s community partners. With funding support from the Health Resources and Services Administration (HRSA), the AIR-B Network has developed interventions to help underresourced families of children with autism and has hosted free local conferences at each site to share research findings with community members for five consecutive years.

The conference is an integral part of community-partnered participatory research (CPPR), the model utilized by the AIR-B Network. In CPPR, community and academic members are equal partners that collaborate in all stages of research (Jones & Wells, 2007). CPPR-style conferences have shown success in engaging minorities in other disciplines, such as depression (Mendel et al., 2011), cancer (Jones et al., 2013), public health (Iyer et al., 2015), and stroke (Bharmal et al., 2016). UCLA, the coordinating site of the AIR-B Network, jointly hosts the annual autism conference in Los Angeles with its community partner and developer of CPPR, Healthy African American Families (HAAF).

UCLA and HAAF have formed a workgroup that meets monthly to discuss study design, recruitment, planning of the annual conference, data analysis and dissemination. The workgroup has grown over the years and its regular members include community-based organization staff, self-advocates, and parents from diverse cultural backgrounds. These partners have played a vital role in expanding the workgroup’s outreach to Latino and Korean American communities in Los Angeles.

The purpose of the annual autism conference is to report back the findings of AIR-B research projects to the community, to disseminate evidence-based autism information and to strengthen the partnership between academic and community members. Following the CPPR principles, the academic and community partners decide on conference topics and speakers, develop survey tools, lead conference sessions and collect data together. After the conference, workgroup members review the survey data and make modifications to the upcoming conference based on evaluations.

According to last year’s conference data, the community conference was successful in attracting its target audience, underresourced families of color affected by autism. Over 200 people participated in the conference as organizers, vendors, volunteers and attendees, and among those who responded to the demographic survey (N = 133), more than half (51%) were caregivers, with 21% earning $9,999 or less annually (76% earned less than $60,000). About half (49%) of respondents were Latino, 24% Asian, 18% African American, and 8% others; 23% spoke Spanish as their primary language and 15% Korean.

After the conference, attendees reported feeling more confident in finding information about effective autism therapies, participating in autism research, their knowledge about autism and trust in community agencies. Interestingly though, analyses by race showed that Latino respondents also reported increased understanding of research participants’ rights, but African Americans showed no change in any survey items, partially due to their high baseline scores. Asians showed an increase in their perceived knowledge in autism only. Although African Americans and Latinos rated the conference higher than Asians, almost all respondents agreed that the conference increased their knowledge in autism and services (99%), advocacy (98%), transitions (100%), and that the conference helped them make new connections (99%).

The high participation of these usually hard-to-engage families can be attributed to the community-friendly aspects of the conference. The conference is held at an African American church, and the location is easily accessible to diverse communities in Los Angeles. It happens in March to avoid overlapping with school spring break and other autism events in April, Autism Awareness Month. The location and time are kept consistent so that community can remember that the conference is coming back every year. The conference gives families an opportunity to hear from not only researchers but also parents, self-advocates, and community service providers. Families can participate as organizers, volunteers or speakers at the conference, even if they are non-English speaking, as Spanish and Korean interpretation and translation are provided. In addition to educational topics, the day is also filled with fun, such as performances and raffle drawings. Local media coverage of the conference has helped with outreach.

Families who come out to these conferences often find out about community resources and ongoing research that they would not have encountered in their everyday life. Also, as it is a less invasive and more natural way to learn about research, families are motivated to sign up for studies of their interest. Although it can take years and hard work to build strong partnership between research and community, it may be worth striving for, especially in the long run.