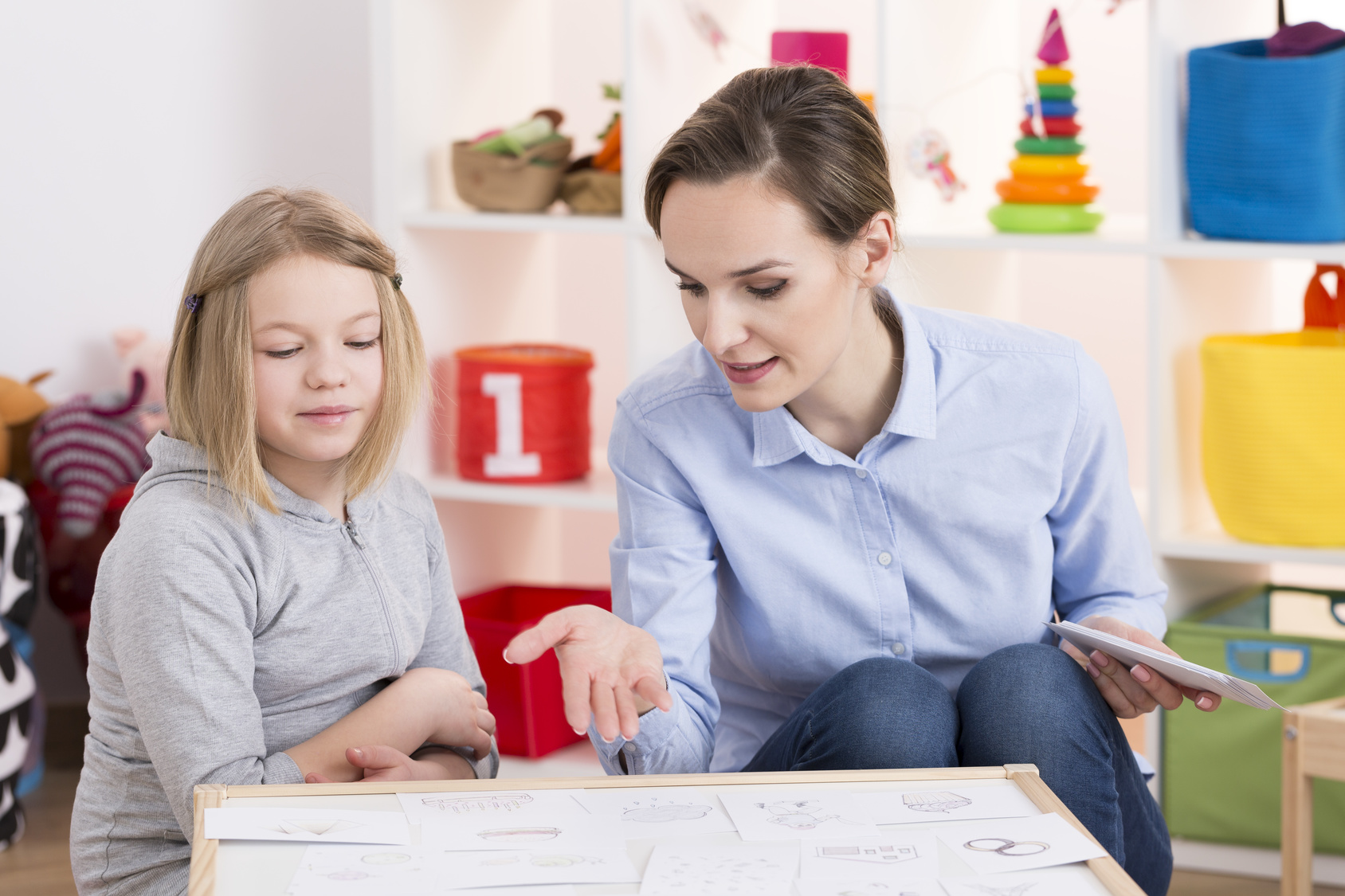 Autism Spectrum Disorder (ASD) is a generally life-long neurodevelomental disorder characterized by impairments in social communication and social interaction and the presence of restricted and repetitive behavior. There is significant heterogeneity among individuals with ASD, and symptoms of ASD can change over time (Lord, Bishop, & Anderson, 2015). From the childhood to adult years, there are varying levels of support an individual with ASD may need in home, school, community, and workplace settings (Howlin, Goode, Hutton, & Rutter, 2004). 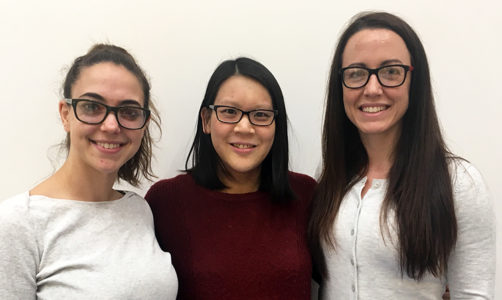 Impairments in Social Communication and Social Interaction – Deficits in social communication and social interaction are core features of an ASD diagnosis, with subcategories including: (1) impairment in social response, (2) deficits in nonverbal communication, and (3) difficulty with or understanding relationships (American Psychiatric Association, 2013). Children with ASD show deficits in their ability to use verbal and nonverbal communication behaviors when regulating social interactions and simultaneously often have difficulty understanding social relationships at the level anticipated for their age. Examples are provided in table 1.

When considering an ASD diagnosis it is important to understand how a child’s social and communication impairments manifest within a broader developmental picture and how impairments vary across settings. For example, a young child might initiate eye contact more frequently with a parent than a teacher. Similarly, it is common for young children with autism to direct positive social communication behaviors (e.g., pointing, eye contact, vocalization) towards an adult in a situation where the child is highly motivated to get something (e.g., snack, toy) but less so during pragmatic contexts that are solely related to shared interest (e.g., showing or giving toys to others). In addition to considering context, it is also important to consider moderators such as language level.

A child’s language skills will affect symptom presentation. Young children who have largely met language milestones (e.g., obtained phrase speech by 30 months) may seemingly appear to be on target developmentally because they have the ability to speak. Most often however they have seemingly subtle but atypical features to their language development. A verbally fluent 2.5-year-old may talk at length about factual information related to a highly specific topic but simultaneously not respond appropriately to basic questions about personal experiences.

Presence of Restricted and Repetitive Behavior – Restricted and Repetitive Behaviors (RRBs) are the second set of core symptoms of ASD (American Psychiatric Association, 2013). Per the DSM-5, there are four types of RRBs, including: (1) Stereotyped and repetitive behavior; (2) Inflexibility; (3) Restricted or fixated interests; and (4) abnormal response to sensory stimuli. How these symptoms manifest into observable behavior can vary greatly. Examples are provided in table 2. 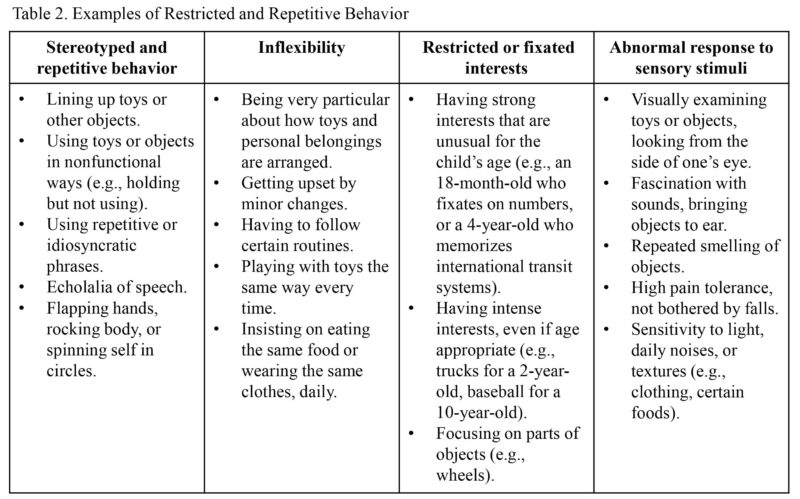 Research has shown that RRBs are generally present in young children with ASD and stable across time as a child enter preschool (Joseph, Thurm, Farmer, & Shumway, 2013; Kim & Lord, 2010; Morgan, Wetherby, & Barber, 2008). However, identifying RRBs is sometimes a challenging endeavor. It is sometimes difficult for a parent to recognize an RRB as a symptom of ASD, especially if their child is young and has not yet entered structured social settings, such as nursery school. If a parent does not recognize an RRB as a symptom of ASD it is unlikely the parent will report the behavior as a problem to a clinician. Children with ASD will not all display the same RRBs (Bishop et al, 2013; Kim & Lord, 2010; Morgan, Wetherby, & Barber, 2008). It is possible that a child with ASD will never display the RRB that a parent may more readily associated with an ASD diagnosis. For instance, parents may unintentionally place more weight on certain behaviors, such as repeated hand flapping, and discount other repetitive behaviors such as a highly focused interest in vehicles. However, from a diagnostic perspective, all types of RRBs are equally weighted and a child only needs to have two clear RRBs to meet criteria for an ASD diagnosis.

Moreover, it is important to keep in mind that the initial manifestation of RRBs may not be concerning or appear overly unusual because they may seem age-appropriate (e.g., a two year old boy who likes trucks). Other times, parents and other professionals might mistake an RRB for a sign of intellectual giftedness (e.g., an 18-month-old who can recite the alphabet and form words with magnetic letters). Unfortunately, even seemingly “harmless” RRBs can become problematic to a child’s development over time. Engaging in repetitive actions with toys or objects (e.g., spelling words on the refrigerator with magnets for a significant portion of the day), becoming over focused on a particular topic (e.g., frequently talking about trucks or dinosaurs), or being inflexible with change (e.g., extended tantrum because one of the letters is missing) can negatively affect a child’s ability to interact with other children and to succeed in structured settings such as preschool.

Evaluations at the Center for Autism and the Developing Brain (CADB)

Given the complexity and heterogeneity in an ASD diagnosis, we find that parents and children benefit from comprehensive evaluations that integrate multiple sources of information such as parent interviews and clinician observations (Kim & Lord, 2012; Risi et al., 2006). Evaluating a child across different contexts allows for comprehensive assessment of the child’s cognitive, language, motor, social, and adaptive functioning (Lord & Jones, 2012). Given that these skills can moderate a child’s autism symptoms and affect prognosis, we find it necessary to evaluate all facets of a child’s functioning. By better understanding how symptoms of autism fit within the larger developmental picture of the child also help us to provide information to the family to better understand how autism is individually affecting their child, which can guide a parent’s decisions about treatment.

Child Testing – Although parents’ account of their child’s symptoms is important, relying solely on parent report can decrease the accuracy of an ASD diagnosis (Taylor et al., 2014), resulting in both false-positives (Charman et al., 2007; DiGuiseppi et al., 2010; Hus et al., 2013) and false-negatives (Taylor et al., 2014; Mazefsky, Kao, & Oswald, 2011; Eaves, Wingert, Ho, & Mickelson, 2006). Thus, direct testing and observation of the child is an important component of the evaluation process (Lord & Jones, 2012). The us of standardized diagnostic measures and observations to directly assess the child’s social, communication, play, and behavioral functioning within the context of common social situations are recommended by the New York State Early Intervention Program (NYS Department of Health, 2017). The Autism Diagnostic Observation Schedule-2 (ADOS-2; Lord et al., 2000) has been considered one of the gold standard diagnostic measures, which has shown high sensitivity and specificity for an ASD diagnosis when administered by a trained and reliable clinician (Gotham, Risi, Pickles, & Lord, 2007; Hus & Lord, 2014; Kim & Lord, 2012). Additionally, measures such as the Mullen Scales of Early Learning (MSEL; Mullen, 1995) or Differential Ability Scales, Second Edition (DAS-2; Elliot, 2007) can be used to capture the child’s language level as well as cognitive and motor functioning.

Using assessment to evaluate treatment progress – Standardized tests of cognitive, language, and adaptive functioning can be repeated following treatment to assess for gains. Measuring progress in social, communication, and play skills is more challenging. The ADOS-2 may not be sensitive enough to detect subtle changes in social communication symptoms over time in children receiving intervention (Anagnostou et al., 2015), although use of the ADOS was previously encouraged for this purpose (Cunningham, 2012; Matson, 2007). In response to the need for a measure of treatment response that adequately captures changes in social communication in ASD, the Brief Observation of Social Communication Change (BOSCC; Grzadzinski et al., 2016) has been recently developed and validated based on 56 minimally verbal children with ASD, ages 1-5. The BOSCC is currently being used to assess short term changes in social communication skills in the Early Intervention program offered at CADB. Currently, we have noticed changes over a 6-month period across cognitive, language, adaptive functioning, social communication and RBRs and are looking to validate those changes using the BOSCC (Vibert et al., under review).

To learn more about the Department of Psychiatry at Weill Cornell Medical College, visit http://psychiatry.weill.cornell.edu/. For more information about the NY Presbyterian Center for Autism and the Developing Brain, visit http://www.nyp.org/psychiatry/services/center-for-autism-and-the-developing-brain.

The Shrub Oak International School, located in New York’s Westchester County, is scheduled to open their doors in September of 2018. Shrub Oak promises to be a “world-class, private, special […]

Adult ASD Diagnosis: “It’s Not a Label – It’s an Explanation”

About a year ago, I attended a conference workshop on adult autism diagnoses which addressed their value to those on the spectrum. I was surprised, and even shocked, to learn […]