Hormonal Fluctuations and Women with Autism: A Call for Increased Awareness and Assessment

The topic of hormonal influences on women with autism has received scant attention from health care researchers. The responses to hormonal fluctuations and/or depletion of estrogen are varied and present challenges in health care prevention and promotion for some women with autism. Treatment decisions for Premenstrual Syndrome (PMS), Premenstrual Dysphoric Disorder (PMDD), Perimenopause, and Menopause can be controversial and complex. Women with autism are at risk for being excluded from this decision-making process. 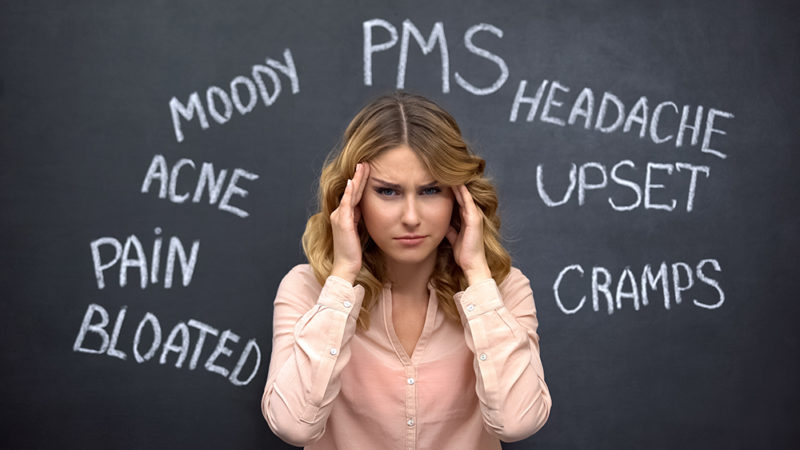 Behavioral disturbances before or during menses are a frequent presenting problem in gynecological referrals for women with autism. Several reports/case studies identify marked changes related to menarche (the onset of menses) and menstruation in girls and women with autism (the majority having additional intellectual disabilities): These studies describe cyclical self-injurious behaviors (Lee 2004); an amplification of symptoms associated with autism such as sensory issues, repetitive behaviors, (Hamilton et al. 2011; Lee 2004); and mood symptoms/emotional dysregulation (Hamilton et al 2011; Obaydi & Puri 2008; Lee 2004). Oftentimes, psychotropic medications are prescribed without an adequate investigation of the cyclical nature of these behavioral patterns.

The condition known as PMS and its more severe form PMDD are often not addressed. PMS and PMDD are characterized by two key elements: symptoms (which can differ among women), and their timing in relation to the menstrual cycle.

PMDD is a classification of mental disorders described in the Diagnostic and Statistical Manual of Mental Disorders, 5th edition (DSM-5). PMS has been associated with dozens of different symptoms, though some are seen more frequently than others. Existing health problems are reported to worsen in this premenstrual (luteal) phase of the cycle. Examples common to women with autism are epilepsy, asthma, sinusitis, and chronic depression (see Table 1). 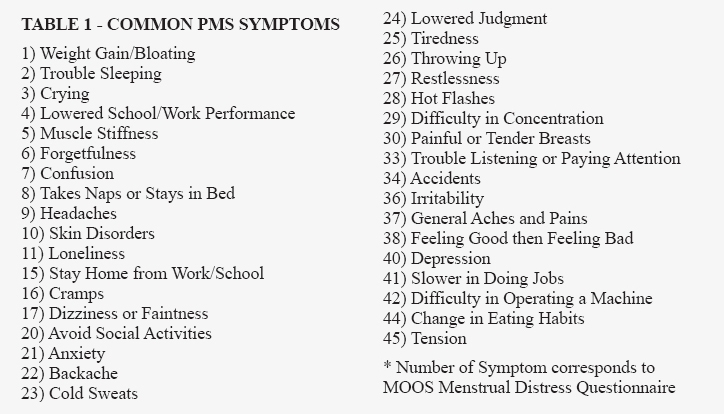 As there are no specific tests for the diagnosis of PMS, monthly charts illustrating occurrence of symptoms are necessary to diagnose the syndrome. Documenting signs and symptoms of PMS can present a challenge for health care providers of women with developmental disabilities. Often the history is either unobtainable or incomplete. PMS Assessment is best approached when charting of symptoms daily consistently occurs over a three-month interval. Bergen’s Promise, a care management organization within the New Jersey Children’ System of Care, serves a large population of individuals with autism. Through an integrated pediatric behavioral health home, the organization utilizes menstrual tracking tools, adapted from the Managing Menstruation resource from the Queensland Centre for Intellectual and Developmental Disability (Taylor, Carlson, Griffin, & Wilson, 2010), to encourage consistent charting.

Those who experience PMS often have symptoms which are typically associated with hypoglycemia, such as headaches, sweating, fainting and dizziness. These women frequently binge or crave chocolate and salty foods such as potato chips.

Women with autism PMS or PMDD may experience a symptom-free interval characterized by tremendous amounts of energy followed by a low energy time interval: relaxation and regular exercise are a must.

As women with autism age, hormonal fluctuations can impact physiological, psychological/behavioral, and cognitive dimensions of wellbeing. The transition to menopause can be divided into three phases: Premenopause, Perimenopause, and Postmenopause.

In Perimenopause, the hormones of estrogen and progesterone decrease with a subsequent change in the length of the cycle and change in monthly flow. There is a further decrease in serotonin, endorphins, dopamine and estrogen brain receptors resulting in mood changes, headaches, insomnia, fatigue, and forgetfulness.

Insulin sensitivity continues to enhance food cravings and appetite changes. There is also a decrease in thyroid activity, metabolic rate and subsequent weight gain. Hot flashes, heart palpitations, skin changes (including vaginal dryness) and formication (a sensation like insects crawling on an area of skin may occur).

In Postmenopause, the woman with autism may experience some of the same symptoms of Perimenopause but to a lesser degree. Bone loss (osteoporosis) and risk of heart attack increases in this phase. Abdominal fat and an increase in waist to hip ratio also occurs.

In general, women with autism are not adequately prepared for these menopausal phases. Menstrual knowledge is commonly addressed as a hygiene issue for this population and their caregivers. Information given by the health care provider to women with autism regarding PMS/PMDD, premenopause, perimenopause and both surgical (hysterectomy-induced) and natural menopause often is scant or non-existent. It is interesting to note that in the US, education and income level are related to the likelihood of having a hysterectomy.

This group and those helping them make decisions need to be aware of the risks and benefits of Hormone Replacement (HRT).

Now that women with autism are routinely living past menopause, this aspect of life needs to be part of the health promotion strategies for this population.

The interactions of psychological, sexual, physical, vocational and recreational decisions concerning the perimenopausal and postmenopausal phases are complex and powerful. Approaches to hormonal changes effect mental health, energy levels, the cardiovascular system, bone strength, sexuality, and potential cancer risk. It is in this context that female self-advocates and all persons involved with the health and well-being of women with autism should become aware of the effects of hormonal changes during the luteal phase of menstruation (Premenstrual Syndrome), the Premenopausal phase, the Perimenopausal phase and Postmenopausal phase. Knowledge regarding health status and disease risk during these stages is essential. Increased awareness and assessment are the first line of implementation and should be implemented to promote optimal health in the continuum of hormonal passages for all women with autism.

Jan Schlaier, EdD (c); FNP-BC, is Director of Health Services and, Jacqueline Berko, RN BSN, is a Behavioral Health Home Nurse at Bergen’s Promise. We would like to thank Dean Pastras, CEO of Bergen’s Promise, for his leadership in providing integrated healthcare to Bergen’s Promise. For more information, please visit www.bergenspromise.org.

Lee DO. (2004). Menstrually related self-injurious behavior in adolescents with autism. Journal of the American Academy of Child and Adolescent Psychiatry. 43: 1193.