How the AANE Wallet Disclosure Card Turned Around an Unfortunate Situation

K is a 32 year old adult with Asperger Syndrome (AS), has been a member of the Asperger’s Association of New England (AANE) for about eighteen months. He participates in one of our weekly adult discussion/support groups, attended our adult summer conference (“Know Yourself: The Key to a Better Life”), and volunteers in our office. One thing he learned from people at AANE is that if you are a teen or adult on the autism spectrum, it’s a good idea to fill out a copy of our wallet disclosure card and carry it with you whenever you go out. 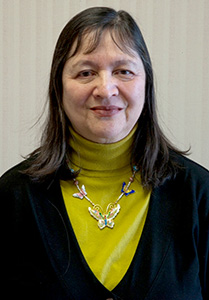 K describes himself as a night owl. One weekday evening at about 11:00 p.m., K was in downtown Boston, hoping to hear some karaoke and grab a bite to eat. He walked by a McDonald’s and a CVS, and turned down an alley, heading toward a bar that he knew had karaoke on Sunday evenings. When he got there, however, he found out there was no karaoke that night.

Well, he thought, I’m pretty hungry. I’ll just head back around the corner to the McDonald’s and pick up a burger. The lights in the restaurant were still on, and when he pulled the door, it opened. As he entered the restaurant, he heard an alarm ringing somewhere. Suddenly the lights went out. He backed out the door, thinking he would ask at the CVS next door whether the restaurant was in fact open. However, he found his way blocked by a Boston police officer. A cruiser was there, with its blue lights flashing. A second policeman appeared.

The officers escorted K back into the restaurant and asked him in a stern tone what he was doing. He felt afraid. They asked for his ID. K asked whether he could also show them his Asperger Syndrome wallet card.

Both policemen read the information on the card. Then they asked, “What is this ‘Asperger Syndrome?’”

“How does it affect you?”

“It causes me to have concrete, black and white thinking.”

The officers’ tone changed. They seemed to realize that if they were interviewing a person with a disability, he might not be a thief or other kind of criminal. Nevertheless, they asked K to empty his backpack to ensure that he had not taken anything. They asked him what he was doing downtown, in a neighborhood considered dangerous this late at night, where he had been prior to entering the restaurant, and where he was headed. Finally, they gave him permission to leave.

K took the train to another neighborhood, where he knew the McDonald’s stayed open until 2 a.m., and finally got his burger. He says, “I’m grateful that I had the AS wallet card with me that night. It really made a difference!”

Wallet Card for Disclosure to First Responders and Law Enforcers

With Special Thanks to Dennis Debbaudt, Mary Fox, Debby Geheran, and Steffi Geheran 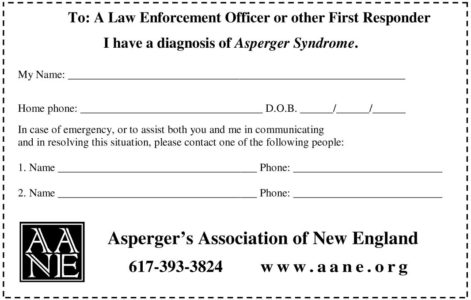 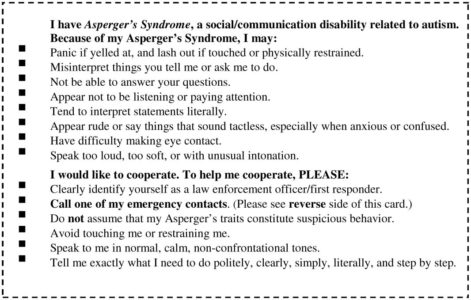 An important time for a person with Asperger Syndrome (AS) to disclose the fact that he or she has AS is when interacting with a “first responder” such as a police officer, fire fighter, or emergency medical technician. This kind of disclosure may be especially challenging, because the situation may be one in which the person may well feel threatened or unsafe. If you are an adult or teen with AS, we suggest that you carry a copy of the card below in your wallet at all times, to use in such difficult situations. Be sure to write on the card the names and telephone numbers of two people who know you and who explicitly agree to serve as emergency contacts for you if you ever find yourself in a difficult situation with a police officer or other first responder.

Some parents take their children to meet local police and disclose their AS in advance of any possible incident or emergency. Teens and adults could also make it a point to introduce themselves to local police, perhaps taking along a family member or trusted friend to facilitate the meeting. It is far easier to establish a mutually respectful relationship at a time when everyone is calm, than in the midst of an emergency or active law enforcement incident.

The expert on these issues is Dennis Debbaudt, who has kindly spoken at AANE conferences and trained law enforcement personnel and other first responders in New England on behalf of our community. You can receive his e-mailed “Autism Risk and Safety” newsletter by contacting him at ddpi@flash.net. AANE staff members have developed this card based on models created by Dennis, and on his insights and teaching.

It is very important to ask a police officer for permission to reach into your pocket to get your wallet and the card yourself, or tell the officer exactly where you are carrying your wallet – purse, left side coat pocket, etc. – and ask the officer to please take out the wallet and look for the card himself or herself. For example, you could say, “Officer, I have a card in my wallet that ex- plains my disability. May I please show it to you, or would you prefer to reach into my back pocket yourself?” If you just reach into your pocket suddenly, the police officer may think you are reaching for a weapon, and react in a way that could endanger you.

A simple idea to bring autism awareness to the New Rochelle Police Department and the City of New Rochelle, NY, has since spread to over 350 first responder agencies around […]

Autism and Law Enforcement: Training, and When to Say No

This article aims to stimulate discussion concerning the balance between teaching individuals with autism spectrum disorder (ASD) to trust law enforcement to keep them safe, and the need to interact […]

Those in the autism community are familiar with missed social connections, but misunderstood behaviors have the potential to escalate quickly during interactions with law enforcement. A recent study1 found that […]

Children and adults with autism engage in many challenging behaviors, many of which pose safety concerns. These concerns can increase the likelihood they will interface with police officers and other […]