Forty years ago, my son Matthew was born. At the time of his birth, he had no apparent health issues. We began noticing that he wasn’t developing like a neuro-typical child when he wasn’t hitting milestones like rolling over. Since then, we have gone through countless tests and been given countless diagnoses: Autism, Obsessive Compulsive Behavior, Bi-polar, Anxiety. And from some doctors, severe intellectual and developmental disability with no known cause. And then, in 2022, when Matthew was 40 years old, our long and frustrating misdiagnosis journey came to an end. We finally received the one diagnosis that explains all the others: a genetic change in the SYNGAP1 gene, causing a disorder with an unwieldy name. 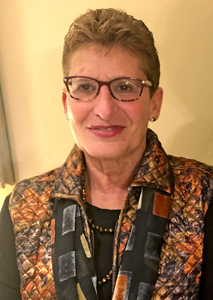 SYNGAP1-related Intellectual Disability (ID) is a rare genetic disorder. People living with this disorder, or Syngapians as they are sometimes lovingly called, experience a wide range of neurological issues beyond intellectual disability. They live with challenges such as hypotonia, epilepsy, autism, sleep disturbances, and predictable behavioral challenges that are difficult for the patient as well as the people who care for them. Because of the multitude and diversity of symptoms, some of which intensify or retreat over time, individuals like my son go through years of tests, wrong diagnoses and, in some cases, deterioration of their symptoms.

The SYNGAP1 gene was first identified in 1998. Then it took just over ten years for the gene to be linked to a disease. In 2009, a study of 100 people with ID found that three of the people had a broken SYNGAP1 gene as the cause of their symptoms, previously known as MRD5. While some aspects of the structure and biochemical functions of the SYNGAP protein have been characterized in just over 20 years of research in animal models, there is still so much we have yet to understand about the scope of this 13-year-old condition in people.

One thing we do know is that SYNGAP1 pathogenic variants are a common cause of ID, with the incidence calculated to be 6 per 100,000 or 1 per 16,667 individuals. This comprises approximately 1% of all ID cases, making it one of the most common genetic causes of ID, similar to more well-known syndromes that have been studied for much longer, like Fragile X, Angelman, and Rett Syndromes. Last year, the CDC granted an ICD-10 code (F78.A1) to this disease based largely on the predicted incidence. Barriers to genetic testing, however, currently limit the number of actual diagnoses. As of December 2022, there are more than 1,135 cases of SYNGAP known worldwide. In Q3 2022 alone, 37 new Synganpians were identified. 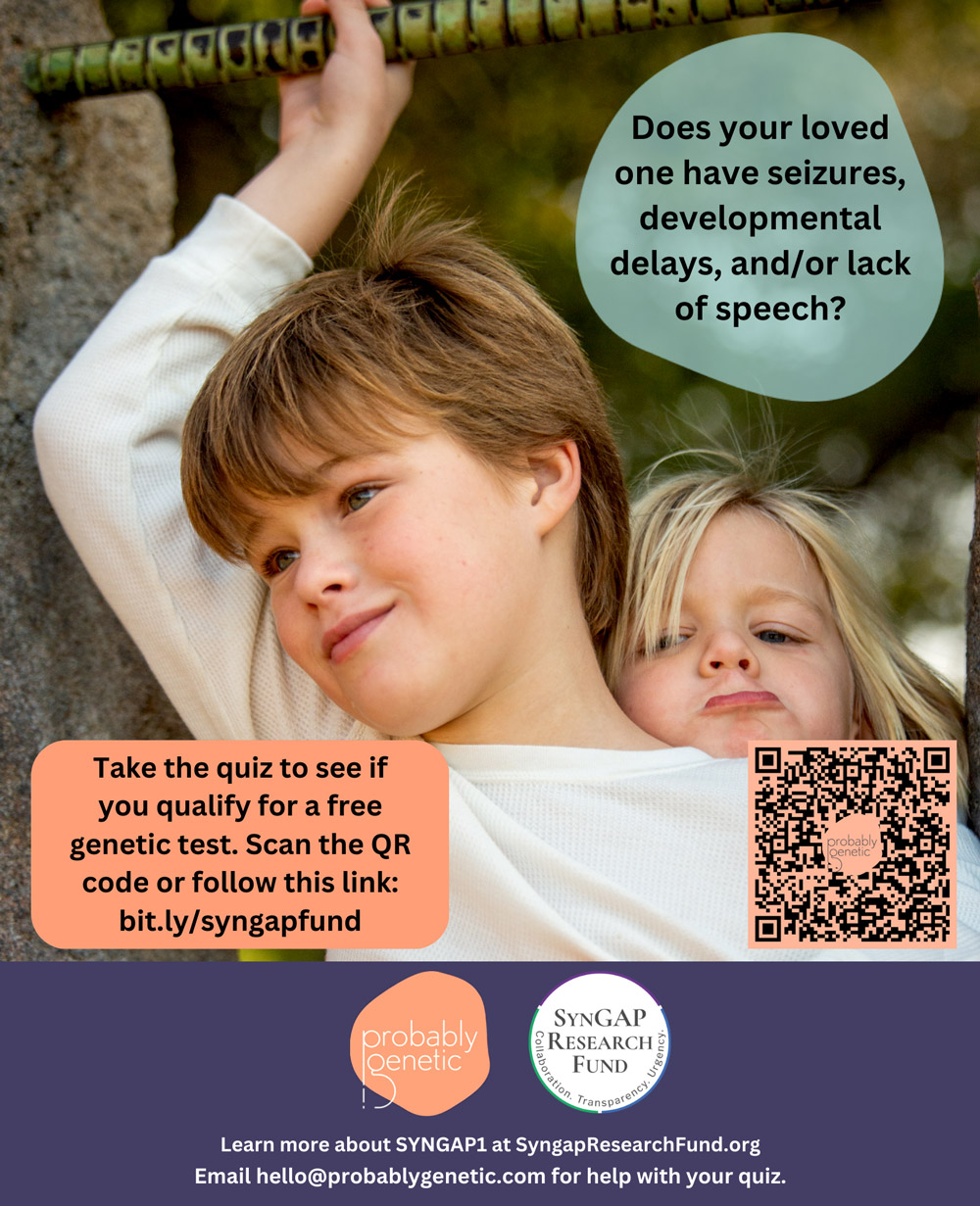 Anecdotally, we know that many people with a SYNGAP1 diagnosis also have an autism diagnosis. What does research data say about that? SYNGAP Research Fund shares the following about the connection between SYNGAP1 and autism: One study of SYNGAP1 patients found 54% also had an autism diagnosis. In another study, the number was 73%. It should be noted that to date, these studies have both included patients younger than four, (the age after which an autism diagnosis is more likely) and include relatively small numbers of subjects (57 and 15 respectively). With continued research, and equal opportunity for a standard battery of testing, those numbers are likely to change. And research that does not start with a SYNGAP1 diagnoses has a different way to describe the link. In fact, recent research that included over 35,000 individuals (nearly 12,000 with an autism diagnosis) identified SYNGAP1 as a leading autism gene among the 102 autism-associated genes found in the analysis. Whether one starts with autism and looks for SYNGAP1 or starts with SYNGAP1 and looks for autism, they are linked.

The Value in Genetic Testing

For my family, genetic testing not only finally identified the cause behind Matthew’s symptoms, but revealed other information that could help us navigate his future health and healthcare. For example, we found that, as a result of one particular well-known gene variant, he is at higher risk for colorectal cancer (CRC). While CRC is not something we can prevent, we can prioritize prevention measures to look out for early signs of the disease. For Matthew, that means beginning surveillance through colonoscopies at age 40 (now!) instead of 45, and repeating them every five years, instead of the commonly recommended 10 years.

Receiving a genetic diagnosis personally affected our family by giving us specific and accurate knowledge and by shining a light on other health issues to monitor. For the broader community, the consequences of specific and accurate diagnoses are just as positive and comprehensive. First, an increase in genetic diagnoses grows the number of patients so it also grows the base of knowledge about the condition and all of its complexity. Second, increased numbers through genetic testing increases the patient pool for clinical trials. In addition to the obvious (more is more), having more identified patients changes the landscape by making our disease more attractive to researchers because of their increased ability to get data, and by making our disease more attractive to industry because more patients to cure results in more motivation to create treatments. More treatments in development in turn means that an individual is more likely to have the opportunity to be included in a treatment trial. And finally, the more we see a range of patients at different stages with the same causal issue, the more we will realize things we don’t yet even know to ask about. It will be possible to provide answers to currently unanswered, and even unasked, questions.

Should You Consider Genetic Testing?

Every individual is different, as is their diagnosis and their experience with a disease like autism or ID, epilepsy, or SYNGAP1. Therefore, the decision to pursue any testing – genetic or otherwise – is extremely personal. One way to look at the question is: if I was to be given new information, what would change? This article has already listed some of the direct changes that come with a diagnosis. But even if treatments are not on your mind or are likely to figure in your family’s future, a genetic diagnosis can result in community support.

For those of us in the SYNGAP community, testing led us directly and quickly to one another, despite being scattered around the country and the world. Since we are all dealing with a similar set of medical, behavioral, and scholastic issues, we have built a strong support system. When we share our experiences that sound foreign to others, it often leads to platitudes and ending the conversation due to discomfort on each side. But with other SYNGAP families, we receive understanding, comfort, and similar anecdotes and knowing reassurances. We share our creative solutions to our unusual and tricky problems. We recognize each other’s efforts and each other’s victories, even when they are invisible to most other people. The ability to connect with people going through the same things takes the experience of isolation that is often felt within families and converts it into a caring and welcoming community. This inevitably results in a sense of belonging and allows us to thrive within a community of people that understands, accepts, and supports one another.

In addition, with increased numbers of patients, we have been able to greatly expand our network of clinical experts, going from no clinician ever having experience with our disease and disbelief over many of its complex issues to multiple centers and a clinical guidelines document that we can hand to our doctors. This has resulted in a fast-track to understanding the disease itself and, what feels like a miracle, we are going to be notified when genetic therapies for SYNGAP1 begin trials. Two companies currently have such products in their pipeline.

It is all of these combined benefits of strength in numbers that led Probably Genetic, SYNGAP Research Fund, and others to team up to help identify more people currently dealing with this complex and severe disease. To do that they have created a survey that individuals can take to determine whether the symptoms they and/or their children or siblings are experiencing could likely have a genetic cause. Filling out the survey is not difficult, can be done on a smartphone, and takes only about five minutes.

When the results of the survey indicate a potential genetic link, Probably Genetic sends a free genetic test kit to the person’s home. And, following a quick and easy swab of the inner cheek to collect a saliva sample, you send the kit back for processing at no cost. The clinical genetic report will be available for you in eight weeks. The process is painless and gives high-quality results. If you have previously struggled through blood draws, an amniocentesis, biopsies, or other ways to gather DNA for genetic tests, you will be happy to see that this method is easy and reliable.

Let’s say you’ve gone to the trouble to get one or more genetic tests in the past, maybe a panel or copy number variant analysis, and didn’t find any valuable information that helped your loved one. The current state of genetic testing is more powerful than even a few years ago. Even if you have identified some genetic differences, repeat testing with current technology is a good idea. For some, the report will share information already known. But for others, it could shed new light on weeks, months, or years of diagnostic uncertainty. A specific and accurate diagnosis can open up a whole new world of information, resources, and community.

The more we learn about diseases like SYNGAP1 and its link to other diagnoses, like autism, the closer we will come to developing – and ensuring we have – the best treatments and therapies for the many warriors (and their families) out there.

Fill Out This Survey for a Free Genetic Test