“He has this desire to learn.”

“I knew he was personable and had the temperament for the job.”

These are the words of some AHRC New York City staff describing Alex DeCarlo, a Direct Support Professional (DSP) who brings a unique perspective to his colleagues and the people with intellectual and developmental disabilities he supports. 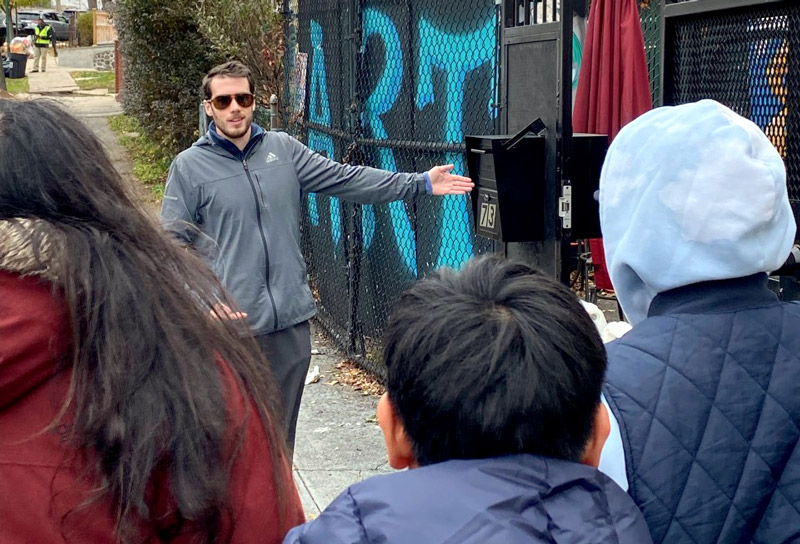 DeCarlo has autism and shares his lived experience with the people attending AHRC NYC’s Day Habilitation Without Walls program in Staten Island.

He is a graduate of AHRC NYC’s Advance & Earn program. The program is designed for New York City residents, age 16-24, who are out of school and are unemployed or underemployed. It is funded by the New York City Department of Youth and Community Development. Participants can earn certification as a DSP, like DeCarlo, or other professions of their choice, and work in a paid internship, before being placed in a job.

DeCarlo is certified as a DSP Level 1, having earned his certification from the National Association of Direct Support Professionals in human services. He interned as a job coach with AHRC NYC’s Employment Business Services in Staten Island nearly a year ago before starting his current position on Aug. 29, 2022.

“The reason I became a DSP is that it’s a great opportunity to help people out and help people pursue their goals,” DeCarlo, 24, says. Goals may include writing a resume or sending an application to a worksite. “Helping them out is a good steppingstone so they can strive to be better people in the community.” 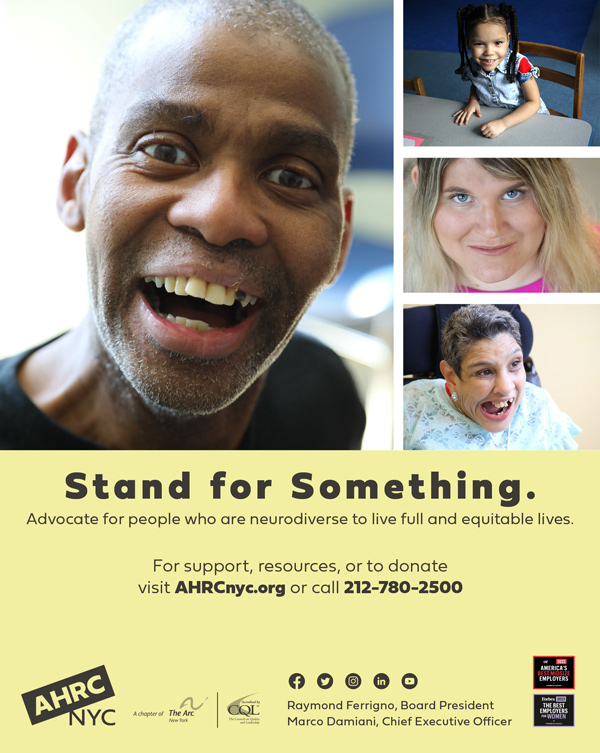 He recognizes that he is breaking barriers by becoming a DSP. “I feel like I’ve accomplished a lot, due to me having a disability,” DeCarlo says. “It goes to show that people with disabilities can also get jobs as DSPs.”

Esteban Gonzalez, Community Support Supervisor at Day Habilitation Without Walls, is DeCarlo’s supervisor. He knows hiring DeCarlo set new ground for the organization. “This is a community that could help our field out,” he says. “By employing them, giving them a sense of direction, they can serve as an example to others.”

David DeCarlo and his wife Kathleen Ryan see how their son has changed over the months.

“When he got involved with the internship with AHRC NYC, he became more focused,” David says. “He takes pride in his work. It seems like he has found his niche.”

Alex has matured and grown more responsible, Ryan adds. “He’s more confident in himself,” she says. “That’s hard for so many people, nonetheless for a person with a disability. To help others, you need to be comfortable and confident. We’re both very proud of how far Alex has come.”

Training people with intellectual and developmental disabilities for DSP positions solves two major issues facing the field. It addresses the current workforce crisis facing every provider in the U.S., while providing people with disabilities the opportunity to find meaningful employment.

The U.S. Department of Labor’s Office of Disability Employment Policy and its National Center on Leadership for the Employment and Economic Advancement of People with Disabilities (LEAD) convened a Think Tank of national experts last year, to identify and make recommendations about the difficulties facing the DSP workforce. One area of focus was an opportunity for people with disabilities to become DSPs. AHRC NYC’s Jonathon Epstein, Program Director of AHRC NYC’s Advance & Earn, was part of the Think Tank.

The New York State Office for People with Developmental Disabilities entered into a $10 million partnership with the National Alliance for Direct Support Professionals to expand opportunities for professional credentialing for DSPs in the field throughout the state. The three-year agreement will provide bonus incentives for certification to incoming and existing DSPs. AHRC NYC is among 17 NYS providers selected to participate in a state credentialing pilot, with the opportunity for staff to pursue certification through NADSP E-Badge Academy.

“Unless we take action to increase the pipeline of DSPs and increase the number and quality of DSPs of this workforce, the potential and talent of people with disabilities who rely upon DSPs in the workplace will go unfulfilled,” Taryn Williams, Assistant Secretary of the Office of Disability Employment Policy with the U.S. Department of Labor, told an audience during a recent webinar.

RCM of Washington’s DSP Academy, which launched in 2018 for people with disabilities, was highlighted during the webinar.

“With the right training, people with disabilities are capable of doing the job,” said Susan Cook, Chief Innovation Officer at RCM of Washington. “Their passion and level of unique self-experience brings an additional level of support that’s invaluable. Recognizing oneself in the staff provides a model for them to set the bar high for themselves.” 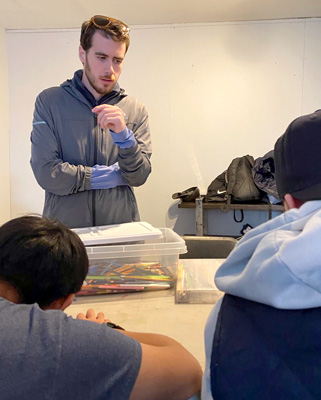 Gonzalez says DeCarlo came well-trained from Advance & Earn. DeCarlo is responsible for the safety of the people in the program, including their overall health and medication needs when in the community or the program. Recently during Dungeons & Dragons Day, DeCarlo encouraged people to participate. “The key was socializing today,” Gonzalez says. “The pandemic hurt socialization skills. Alex talks to everybody and makes sure that anyone in the room is seen and their voices are heard.”

DeCarlo’s work ethic shined during his internship, which began last February, says Crucelina Motta LaSalle, AHRC NYC’s Hudson River Services, Assistant Regional Manager, who supervised Alex during that time. “Alex always welcomed instruction,” she says. “He would tell me, ‘I learned something new today and I will use that moving forward.’ And he always did.”

Upon earning his DSP certification in June of 2022, DeCarlo experienced mixed emotions. While he was honored to be certified, he also knew the Advance & Earn program was coming to an end. “I was happy sad,” he says.

DeCarlo was attending the College of Staten Island when he met Gonzalez, who was a student mentor with AHRC NYC’s Melissa Riggio Higher Education Program. A partnership among AHRC NYC, The City University of New York and the New York State Office for People With Developmental Disabilities, the program provides a fully inclusive higher education opportunity for students with I/DD in New York City. When DeCarlo saw Gonzalez at the Advance & Earn graduation last year, he mentioned that he was looking for a DSP job.

The two are comfortable with one another. Gonzalez mentors DeCarlo if he encounters challenging situations on the job. He enjoys collaborating with staff and the people he supports. “All the people at AHRC NYC tend to treat the people we support with the utmost respect,” DeCarlo says.

With his certification, DeCarlo says he still learns something new each day. “To express the sentiment of the great Charles Darwin, evolution is an everyday part of life moving forward,” he adds. “People can change and become better people and better workers.”

As for the future? DeCarlo says he hasn’t figured that out yet and will take it one day at a time. For now, he’s finding the work rewarding.

“Alex has been through it; he knows what life is like with disability,” Epstein says. “He’s just a natural mentor for other people with disabilities. He understands their lived experience far better than anyone without a disability.”

“I take this whole thing as a win for Alex as a person and our agency,” Gonzalez adds.

AHRC New York City is the largest organization supporting children and adults with intellectual and developmental disabilities (I/DD) in New York State. Its mission is to advocate for people who are neurodiverse to lead full and equitable lives. Its vision is to help create a socially just world where the power of difference is embraced, valued, and celebrated. AHRC NYC was founded by parents of children with disabilities more than 70 years ago, when supports and services were unavailable to meet their children’s needs. For more information, visit AHRCNYC.org.