The Siblings of Autism

About a million years ago, a kind doctor told me the best thing we could do for Jack was to give him siblings. A lot of people ask me how we decided to have more kids once we knew something was up with him. I wish I had a more sophisticated answer to give, but the truth is, we just didn’t know what the heck we were doing. We had no plan. 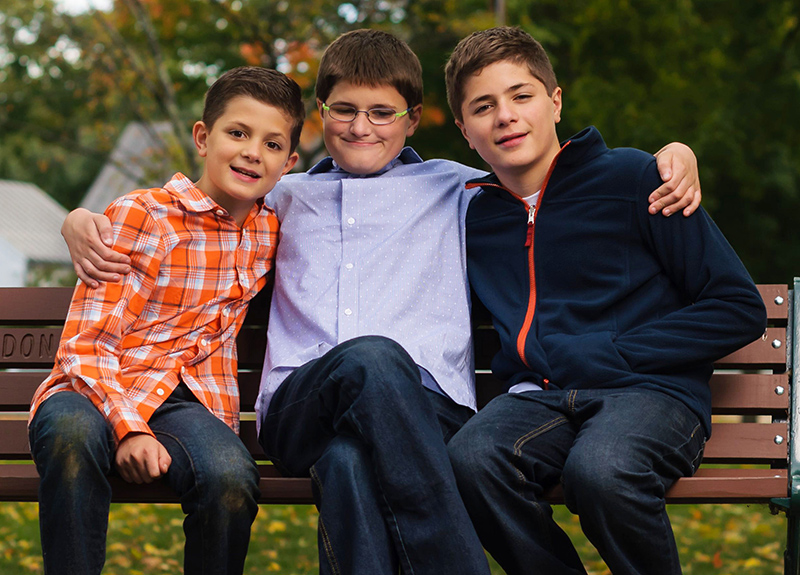 People wonder if we worried about having another child with autism. To be honest, we found out Jack was on the spectrum – originally diagnosed with Pervasive Developmental Disorder, Not Otherwise Specified – and we learned we were pregnant with our fourth child exactly one day later.

So, yes and no. It definitely crossed our minds that another child could have the same symptoms he did, but we didn’t spend a lot of time discussing or dwelling on it. Partly this was because we had three boys under the age of three, and there wasn’t a whole lot of time to discuss anything. And partly this was because we thought Jack would outgrow his symptoms and turn into a regular, sunny boy who played catch in the backyard and told jokes at the dinner table maybe, if we were really lucky (fingers crossed!) made the honor roll at school every once in a while. We were so precious; I can barely stand us.

But I will say this: the doctor was right. Deliberate or not, poor planning or simply naiveté, growing up alongside three boys and a girl has been very, very good for Jack. He eats what they eat, when they eat. He takes a bath at bath time, he goes to bed when they go to bed – in a room he shares with his three brothers and a puppy. He wears itchy khaki pants and a button-down shirt on holidays because our family dresses up on holidays. He says a prayer before dinner because our family begins the evening meal with a few moments of quiet.

Let me tell you, Jack is boss-ey with a Capital B. If he had the chance, this boy would control what we have for lunch every day, what we watch on TV, and which movie theater we go to see Zootopia. But as one of five kids, he cannot run the show. He cannot be in charge all the time. It’s more than that, though.

When Henry was about a year old, he had this giant Mickey Mouse doll. The thing stood at least two feet tall, and when you pressed the middle of his hand, he would shuffle and sing and laugh a high-pitched Mickey-laugh. Jack hated that doll. He was probably about four years old at the time, and he would run shrieking from the room whenever it started to sing. One night after dinner, we found him trying to tape Mickey’s mouth closed.

See, we can’t give him a perfect, quiet world. We can only help him learn to live where it’s loud and unpredictable; where Mickey sings and bedtime comes at 8:00 and your dad wants to go to a different movie theater because he has a gift card. With three brother and one sister, they make sure of it.

Oh, it’s not as pretty as you might think. They pester him. They drag him off the couch and out of the house and into the yard when they need an extra body for games of tag, hide-and-seek, manhunt. They repeat his name until he answers. “Jack, Jack, I am talking to you. Answer me.” They force him to share. “No! You chose the last song, now it’s my turn.” They push him and pull him and talk to him and love him.

And I learned long ago not to get too involved – to let them fight their battles and ask their questions and play their games. This, to me, is his progress. And it’s even more than that.

In our house, if it’s your birthday, you get to pick a restaurant for dinner. And one of the kids always picks the Japanese hibachi restaurant in town. Jack hates Japanese hibachi. Sure, he’ll eat some chicken teriyaki, he just prefers it not be accompanied by a flaming onion volcano or people throwing food at his face.

I get it, I do. That big gong and all the fire and sake-soaked people shouting from the table next to us jangles my nerves too, and I’m not exactly on medication for anxiety. But it’s a birthday, and we have to respect the wishes of the birthday child. Yet we also must respect Jack and his autism and the fact that loud, unexpected noises make him a nervous wreck. So, if we go to Japanese hibachi, he can bring headphones in for music, and if he needs to duck under the table for a few minutes, that’s fine too.

Whether it’s school, church, or dinner in a crowded restaurant, it can feel like we are jamming a square Jack into a round hole. But at home, our pegboard has no circles or squares. There is just a Jack-shape. We are constantly balancing our familial seesaw; we tip this way and slide that way until we stop at a perfect standstill – until we find a quiet harmony. “I will make room for autism. I will make room for you, my brother.”

Jack is regressing lately. I don’t mean he’s losing language (although there’s been a bit of that, too) but his behavior is sliding backwards. He can’t cope in situations that used to cause him no stress. He is impulsive. His right-and-wrong reasoning is off; skewed.

There are moments when he appears nearly incoherent – as though his brain is running at a marathon pace and the rest of him cannot keep up. It is scary, like watching a stranger inhabit our home. I don’t know where he is. I don’t know how to reach him. And then, just as fast as it began, it is over, and he is back.

And I wonder what it’s like for them – for Joey, Charlie, Rose, and Henry – to see their brother disappear altogether and laugh maniacally at a joke no one told and twitch his fingers and scream and startle when someone bangs the cabinet door too loudly. I wonder what it’s like when I stop them mid-sentence, finger raised, and say, “Please, let me just handle Jack for a second.” Or when we all have to listen to him argue for over an hour about why the other movie theater is better than the gift-card movie theater. I worry.

I worry when I – and it shames me to say this – lash out after one of his meltdowns because my patience is as thin as rice paper and I am brittle. Or when Jack’s starting to rev up and I’m trying to calm him, and I catch 10-year-old Charlie’s face out of the corner of my eye – pale and serious.

I see 13-year old Joey put his hand gently on his younger brother’s shoulder at the bus stop to keep him from jumping and stimming right into the street. And I worry less.

I listen when Charlie calls his older-brother across the yard, “Jack! One more time! Let’s play one more round of tag!” And I worry less.

I hear Henry lean over during our hibachi dinner and whisper, “Jack. It’s almost over. They’re almost done singing.” And I worry less.

I stand at my kitchen counter the morning after Easter, tired and annoyed because I’d just stepped on a sticky jellybean, and I watch my daughter tap her brother on the arm. “Jackie,” she says, with her special nickname for him. “Jackie, look at me. Look. I made you this.” She holds up a long braid she’s made with the yarn from her new crocheting kit. “I made you this stress braid. You can pull it as hard as you can whenever you feel yourself getting mad. It will help you.” I look at her earnest face and I watch him slowly take the braid from her hand and turn it over in his own. I watch him pull it – once, twice – to test its strength, before he tucks it into his pocket. And I worry less.

To Joey, Charlie, Rose, Henry, and every other brother and sister who lives alongside the spectrum disorder every single day, I wish you a happy forever autism awareness month.

May your world be filled with singing Mickey’s, flaming onions, and long, colorful strands of unbreakable yarn.

And in the middle of the chaos autism often wreaks – in the center of the storm when your voice seems lost and your needs unmet – I hope you know that you, too, are very, very loved.

“What Color Is Monday?” is available on Amazon.com and BarnesandNoble.com. You can also follow Carrie on her weekly blog: www.CarrieCariello.com and Facebook.com/WhatColorIsMonday.