In 2018, AANE launched our NEUROLOGY MATTERS IN COUPLES THERAPY online training. Since then, 27 therapists have completed both TRAINING 101: Fundamentals of Working with Neurodiverse Couples in Therapy, and CERTIFICATION 201: Case Presentations and Advanced Topics in Neurodiverse Couples Therapy. In this article, we share how one couple’s relationship turned around once their AANE-trained therapist started seeing and treating them through the lens of neurodiversity.

Prior to taking the AANE training, Nicole did not know that her clients Richard and Tina were a neurodiverse couple–and neither did they. 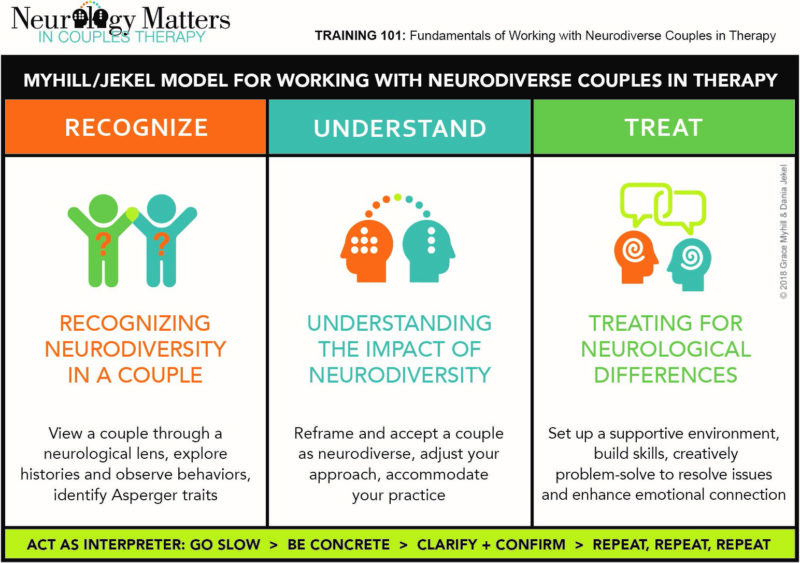 Nicole: “Richard, a retired electrical engineer, and Tina, a retired second grade teacher, presented with typical couples issues. They felt so unable to understand each other that it was as if they spoke two different languages. They had no emotional or physical intimacy. Trying to navigate the demands of daily life together led to conflict and resentment. None of the therapists they saw previously helped them resolve their issues.

Before getting the AANE training, I worked with Tina and Richard for six months, without seeing the progress I expected. They left our sessions hopeful, but came back the next week without having done the homework or experienced any progress. We all felt frustrated.”

Once Nicole was trained, she started to apply the principles of AANE’s Myhill/Jekel Model to her work with Richard and Tina.

Recognize Neurodiversity in a Couple 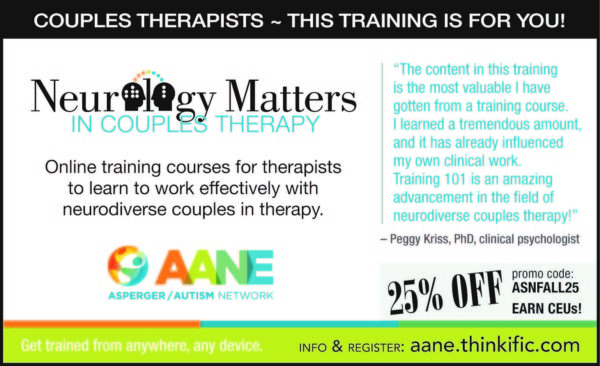 Understand the Impact of Neurodiversity on the Couple

Nicole recognizes that the couple’s relationship dynamic is typical for a neurodiverse couple, with Tina speaking “neurotypical talk” and Richard speaking “Asperger-ese.”

Recognizing Tina and Richard as a neurodiverse couple, Nicole adjusted her therapeutic approach and her expectations. She knew progress would take time. She knew that, due to Richard’s executive function and communication challenges, she needed to give him concise information and explicit directions. Nicole explained to Richard how his traits impacted Tina. She explained to Tina that Richard shuts down because he struggles to identify and verbalize his feelings; then, when Tina got upset, his anxiety soars and further impedes his ability to communicate. None of this dynamic is due to lack of caring about each other.

Nicole thoughtfully shared with the couple that they are neurodiverse, and that because of their neurological differences they really do speak two different languages! She started by discussing Richard’s Asperger-based strengths with them: his prodigious memory for facts and figures, superior intelligence, and ability to solve technical problems–traits which led to success in his career and a high standard of living for the family. He also cares deeply about social justice and ethics, is faithful, and wants to make Tina happy.

Nicole asked whether Richard and Tina had ever heard the term Asperger’s or Autism Spectrum Disorder (ASD) used to describe this perplexing combination of strengths and challenges. As one of their grandchildren was recently diagnosed with ASD, they already knew a little about it. Nicole encouraged them to read first-person stories by people on the spectrum and their family members on AANE’s website (www.aane.org).

The idea that they are a neurodiverse couple brought Tina and Richard new understanding of their relationship dynamics, relief, and hope.

Nicole used the tools she learned in the basic course TRAINING 101, and applied them to Tina and Richard’s issues, as she had learned to do in the advanced class CERTIFICATION 201. She taught them structured exercises, had them practice a lot during sessions, and gave a short, concrete homework assignments.

As Tina and Richard came to understand and appreciate each other more, they experienced moments of real connection. They felt new hope and satisfaction in their relationship, and their level of intimacy increased.

Thirty-five therapists have completed TRAINING 101: Fundamentals of Working with Neurodvierse Couples in Therapy. Therapists who have also completed CERTIFICATION 201: Case Presentations and Advanced Topics in Neurodiverse Couples Therapy have practices in Australia, the UK, Mexico, and many regions of the U.S.A. Neurodiverse couples can search for a therapist on the AANE website: https://www.aane.org/neurodiverse-couples-institute/. Some therapists are able to work with couples remotely.

For therapists or partners in a neurodiverse couple who would like to learn more about AANE’s online trainings and other resources, contact Grace Myhill at grace.myhill@aane.org.

The Unique Responsibility of Neuroexpansive Minds for Cultural Inclusion

As an advocate for those with neuroexpansive minds in bodies that have become commodified bodies, I have come to understand, over the years, that a piecemeal approach to the valuing […]

Neurodiverse Couples: Making Meaningful Moments of Every Day – Having a Good Morning

Many neurodiverse couples struggle with emotional connection and intimate communication. They yearn for a romantic touch, a knowing glance, a kind gesture to make them feel close. These little things […]

Recognizing and Understanding Neurodiversity in Couples

Many couples come to the realization they are in a neurodiverse relationship decades into their relationship, after listening to a podcast, reading a book, or watching a movie that includes […]