A simple idea to bring autism awareness to the New Rochelle Police Department and the City of New Rochelle, NY, has since spread to over 350 first responder agencies around the United States, and continues to grow with each passing month.

On February 7, 2017, I made an appointment to meet with New Rochelle Police Commissioner Patrick J. Carroll (Retired) to discuss a community outreach project for autistic children in New Rochelle. With proto-type in hand, I remember vividly walking into his office to request permission to place a custom designed New Rochelle Police Autism Awareness Patch (magnet) on our patrol cars. The Commissioner loved the idea and granted permission to place the autism magnets on our emergency vehicles, along with patches of the same design on our uniforms during Autism Awareness Month. Once approved I challenged three near-by police agencies to do the same. Each agency accepted the challenge and then challenged three other agencies to follow along. As a result, the New Rochelle Police Autism Patch Challenge (or #AutismPatchChallenge) was born. The challenge has three simple goals: 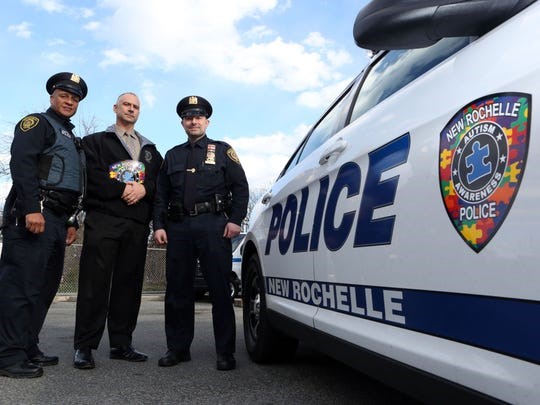 I started the challenge primarily to honor my non-verbal autistic son Christopher and to demonstrate to our community and to surrounding communities that first responders were aware of the concerns expressed by parents and other caregivers – that first responders lack the training to detect autistic behavior and lack the necessary skills to respond to calls for service involving autistic children. What started as a simple gesture to honor my son quickly turned into a nationwide campaign.

Every participating agency that creates an autism patch continues to spread autism awareness and training throughout their communities and throughout the country. Today, many agencies may not even realize where this endeavor started or why, but what is clear is that since 2017, over 350 agencies have been identified as creating their own autism awareness patch and that each participating agency has had a direct and positive impact within their own communities. 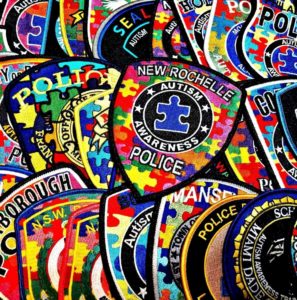 On April 18, 2019, 125 first responders from over 35 surrounding agencies in Westchester County (NY) received free training on autism detection and response (paid for by Christopher’s Voice). On November 13, 2019, 60 first responders from 20 different agencies throughout the Milwaukee Wisconsin area received similar training from Blue Line Spectrum LLC. In NJ, thanks to P.O.A.C. Autism Services over 65,000 first responders have been trained by Gary Weitzen since 1999.

In addition to training, local autism programs have benefited significantly and will likely continue to benefit in the months and years to come. A small sample of fundraisers from around the United States include the following – In Massachusetts, the Randolph Police Department recently raised $3,000 by selling autism patches and donated their proceeds to the May Institute for Autism. In Kent, NY, their police department raised $1,000 for the Anderson Center for Autism. In Mobile Alabama, their police officers sold patches and donated $1,235 to Woody’s Song School for autistic children. In Lea County New Mexico, their Deputy Sheriffs raised $4,500 and donated their proceeds to the Light it up Blue Foundation for Autism. In North Smithfield (RI), their officers raised money for The Autism Project; In Wilmington Delaware, their officers raised money for the Doug Flutie Jr. Foundation. In Seal Beach (CA), officers raised funds for their Special Education PTA and in NY/NJ; the Port Authority Police Department raised $5,600 and donated their proceeds to two local autism charities – Christopher’s Voice and P.O.A.C. Autism Services (Full disclosure – I am the co-founder of Christopher’s Voice).

These are just a few examples of what is happening in police departments, fire departments and EMS agencies from around the country. As I continue to network with officers from different states, I continue to recognize a common trend between the officers that take the lead within their agency. Most officers have a child with autism and each officer wants to honor their child in their community, just as I did.

The inspiration for the Autism Patch Challenge was my son Christopher. Christopher, who was diagnosed with autism at 11 months, has had a very challenging life – one that has been overwhelmed with medical issues. Since April 2018, Christopher has been hospitalized at Blythedale Children’s Hospital in Westchester County with epilepsy and dystonia. Losing his ability to walk, Christopher is now confined to a wheelchair or hospital bed. Prior to being hospitalized Christopher led a limited but happy life. He spent most of his days running joyfully around the house, swinging on his swing, jumping on the trampoline and eating to his heart’s content. Being non-verbal and possessing almost no life skills, Christopher relied on my wife (Tracy), his teachers, therapists and aids for almost everything – except making a mess. Prior to being hospitalized Christopher attended William Ward Elementary School in New Rochelle, where he received constant love, support and friendship. It was there, in April of 2017 (and each year since) that over 75 first responders from over 35 different agencies converged onto the school campus for the first ever multi-agency first responder autism awareness day in New Rochelle. Each responding agency came with their Autism Patch affixed to their emergency vehicles. Responding officers spent quality time with special education students and “regular” students. They distributed autism patches to all the children and completed demonstrations for them. It was a great opportunity for hundreds of children to “meet and greet” with local heroes.

Many of you may be wondering why I wrote this article and the answer is simple – I want the challenge to continue and I want you to encourage your local police and fire agencies to participate. The cost for them to participate is nominal and the return on investment is priceless. Your communities will be thankful, your first responders will be more aware and better trained and just maybe you might have one of these special moments – the ultimate story that demonstrates the success and impact of the New Rochelle Police Autism Patch Challenge.

This story hails from Berlin, Massachusetts. On April 2, 2019 Michael Gomez, a 13-year-old autistic teenager was on his bus going to school when the bus driver began experiencing chest pains and was no longer able to drive or call for help. Michael jumped into action and ran from the bus into his school. Michael pleaded for help and an ambulance responded. The driver was transported to a local hospital where he remained for several more days. Why is the story so special? Because on this day, April 2, 2019 it was World Autism Day and affixed to Michael’s shirt was the Berlin Police Department’s Autism Awareness Patch. “I felt like a first responder” Michael told reporters (during his press conference) and it was the autism patch that gave him “the courage to act.” Priceless!

To this day I remain grateful to the New Rochelle Police Department that continues to allow me to honor my son Christopher and children like him everywhere.

To learn more about the challenge and to read more great stories from around the country visit our Facebook page @ New Rochelle Police Autism Patch Challenge.

For more information, you can email Detective Greco at Cgreco@newrochelleny.com.

As time progresses, so does technology. Whether it’s opening a door or setting an alarm as a reminder, technology has become more available and accessible, especially to individuals with intellectual […]