Individual with Autism Succeeds from Classroom to Career

When you ask those who know Christopher Payne about his work performance, comments like “incredibly hard worker,” “enthusiastic” and “positive” resonate. Chris landed a staff position at NYSID (New York State Industries for the Disabled, Inc.) as a commodities administration specialist assistant where he supports the business operations and communications departments. Although Chris has autism, he works through challenges that are presented to him and completely embraces employment. 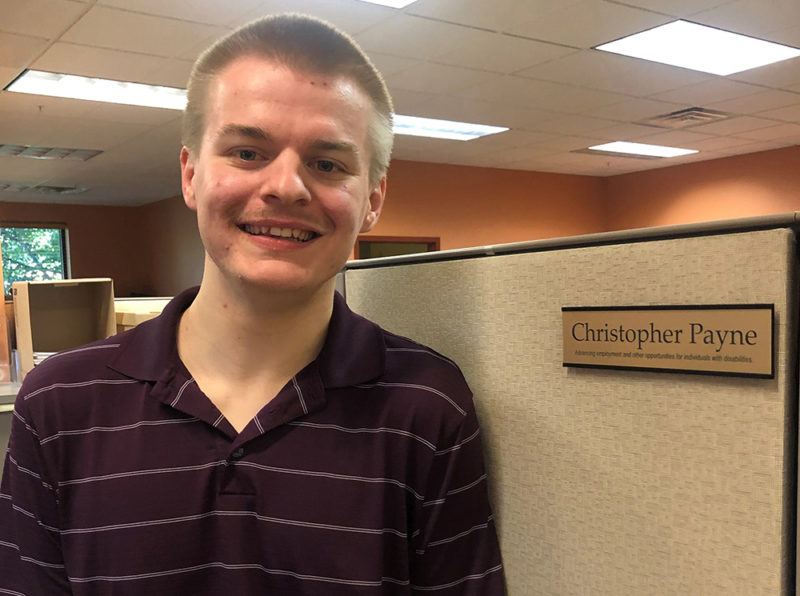 Chris Payne enjoys working in his first career job at NYSID, where his keen attention to detail is appreciated.

“I enjoy everything about my job. I enjoy the people that I work with, as well as the work that I am doing every day. I like NYSID so much because I am doing many different tasks. I do not even consider this amazing job ‘work’ because I enjoy it so much,” said Chris.

NYSID president and CEO Maureen O’Brien said Chris is a fantastic addition to the team and work culture. “I can’t even begin to tell you how often Chris has thanked us for hiring him, and even better than that, he expresses gratitude that we provide him with lots of work. He is doing a great job and is a pleasure to be around. He is all about ability and making important things happen. At NYSID we work hard to create meaningful opportunities for people with disabilities in the area of employment. More than 60 percent of New Yorkers with disabilities are not working, and we strive each and every day to connect more people to rewarding careers,” she said.

Unemployment statistics are even higher for those on the autism spectrum: 70-90 percent of autistic adults are un- or under-employed.

NYSID is a non-profit membership organization with a mission of “advancing employment and other opportunities for individuals with disabilities.” Through its statewide network of 160 non-profit rehabilitative agencies and private sector business partners, NYSID helps put the state’s Preferred Source Program into action. A recent Rockefeller Institute of Government report highlights the impact NYSID makes on New York State’s economy: the economic output for every individual hour worked on a NYSID contract is $86.00, adding $368.9 million to the state’s economy.

Following graduation from Hoosic Valley High School in Schaghticoke, Chris attended Hudson Valley Community College in Troy where he earned an A.A.S. in business administration, and then went on to achieve a B.A. in journalism at University at Albany, graduating with honors. He discovered his love for writing while working on the student newspapers, The Hudsonian and Albany Student Press. During his U Albany education, Chris was accepted for an internship at the New York State Writers Institute where he worked with Paul Grondahl (director) and Michael Huber (communications specialist). Huber also taught him in a journalism class.

“Chris Payne was one of the best University at Albany student interns we have had at the Writers Institute in my time here because Chris is a hard worker, he has a wonderfully positive attitude, and he is enthusiastic and dependable. Chris brought a keen intelligence, along with useful analytical and computer skills, to his work at the Writers Institute. He acknowledged his autism, but it never defined him or his work. He was respected and liked by our staff, by faculty members and by fellow students. We provided Chris an opportunity, but he was the one who took that opportunity and turned it into something more, the start of a professional career. We always like it when Chris comes back to visit us. His smiling face, positive energy and enthusiasm rubs off on all of us. It is not an exaggeration to say that Chris inspires us. He made the most of his internship and he will have a place in the annals of the Writers Institute as a talented young man who left his mark in a very special way,” said Grondahl.

“He’s one of the hardest-working people I’ve ever met. I think Chris’s drive stems from his understanding that he needs to make the most of his opportunities. I miss his presence here in our office. The folks at NYSID are fortunate to have Chris as their newest colleague. He’s a great young guy who brings joy to the workplace,” said Huber.

Chris’ family has been very active with the Autism Society of the Greater Capital Region in Schenectady. Shortly after the Autism Society became a NYSID Member Agency, NYSID reached out to fill two temporary office positions. Janine Kruiswijk, who serves as executive director, immediately thought of Chris and recommended him for one of the open jobs.

“Chris loves communications! He has studied very hard to prepare himself for the field in which he chose to study. Autism can often present with challenges in communication, yet Chris has worked to excel in his career field. He is articulate, respectful of people’s views, and has a great deal of integrity when presenting information. Autism has not stopped Chris from advancing his career goals,” she said.

Chris’ family that includes Maria (mom), Ray (dad) and Lexy (sister) is proud of him.

“When Chris was first diagnosed with autism, we were told that he may never talk or go to school. Fast forwarding to the here and now, and knowing the struggles that he worked through, we are proud that he graduated with honors from high school and college, and that he found a job that makes him happy,” Maria said. “We are grateful that Chris had an aide and teachers that supported him all through elementary, middle and high school. There were times that Chris knew that he was different from other kids at school, but all in all he tried to get along with his classmates and at times provided comic relief. In his senior year, Chris and another classmate were voted ‘most likely to brighten your day,’” said Maria.

As of right now, Chris plans to spend many years working hard at NYSID and is very grateful to be there. In just a few months on the job, he’s become known for concentrated attention to detail and ability to write clever text for marketing projects.