Putting My Lived Experience to Good Use

As an autism self-advocate, I wear many hats: writer, public speaker, advisor, educator. One of my roles is LEND Program Faculty at Boston Children’s Hospital and UMass Boston’s Institute for Community Inclusion. The LEND Program (an acronym for Leadership Education in Neurodevelopmental and related Disabilities) is a graduate level interdisciplinary training and treatment program for future leaders in maternal and child health. The operative word is “interdisciplinary,” as every cohort of LEND Fellows consists of graduate students and professionals from a variety of disciplines: law, medicine, psychology, audiology, physical therapy, etc. There are also designated slots for Family Fellows and Self-Advocate Fellows who bring the knowledge gleaned from their lived experience to the classroom. My official title is Self-Advocate Faculty Member, and just like when I was a Self-Advocate Fellow, this designation indicates my area of specialization. In essence, self-advocacy is my field of expertise. 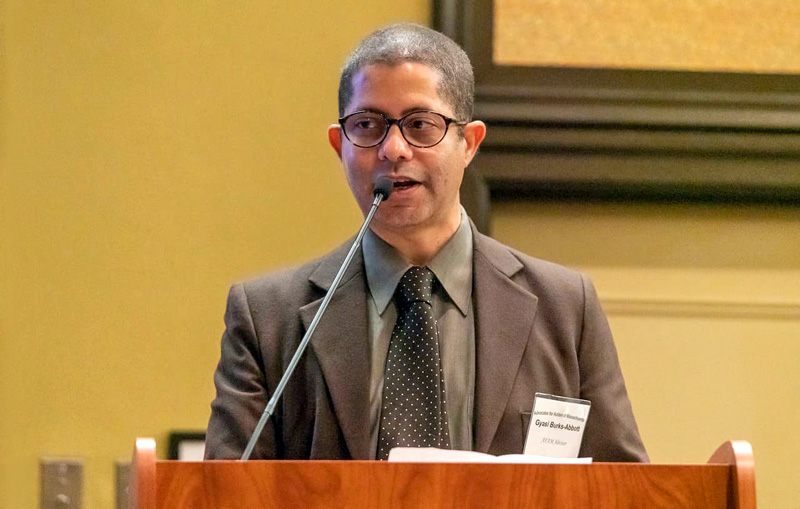 Gyasi Burks-Abbott, MS, speaking at the Advocates for Autism of Massachusetts 15th Anniversary Celebration Gala in 2019

The capstone of the LEND Program is the Disability Policy Seminar in Washington, DC co-sponsored by several partner organizations including the Autism Society of America and the ARC of the Unites States. After a year of weekly lectures, clinic visits, home visits, interviews with state agencies, and volunteer work with community-based organizations, the Fellows take a trip to DC for a three-day conference and an opportunity to speak with legislators. The goal of the Capitol Hill visits is to educate members of congress about disability-related bills and ask them to sign-on as co-sponsors. And the most powerful tool in the advocacy toolkit is the personal story.

When I speak to lawmakers, I know it’s important to come prepared with fact sheets, statistics, and other supplemental material. But I’m also aware that the most compelling information is the impact a particular bill will have on a constituent like me. That’s what will capture their imagination. Legislators certainly go to congress with their own priorities, but they are there to represent us, and they very much want to be re-elected. Caught in a storm of requests, obligations, and demands coming from all sides (while they reign, it pours), a legislator may feel lost at sea. My story can be their compass.

One bill that I look forward to discussing with members of congress is the Supplemental Security Income (SSI) Savings Penalty Elimination Act. a bipartisan piece of legislation introduced by Ohio Senators Sherrod Brown and Rob Portman, a Democrat and a Republican respectively, that would raise the amount of assets a beneficiary can keep in their bank account from $2000 to $10,000 ($3000 to $20,000 for married couples). The SSI Savings Penalty Elimination Act is particularly timely as it was introduced in 2022, the 50th anniversary of the start of the SSI Program. It’s a perfect opportunity to take stock of the program and revisit rules that haven’t been updated in decades. Though I am no longer on SSI, I can still tap into the well of my lived experience and talk about how when I was in my 20s (I’m now 49), I was always caught in the position of not being able to make enough money to be self-supporting but making just enough to potentially jeopardize my benefits. A bill like the SSI Savings Penalty Elimination Act would have been a game-changer.

In my role as a citizen member of the Massachusetts Developmental Disabilities Council, I relied on my lived experience while advocating for a bill to create higher education opportunities for students with intellectual disabilities, autism, and other developmental disabilities who were unable to meet the state’s high school graduation requirements. And even though I never participated in the type of program being proposed (an opportunity to attend a state college or university without graduating high school), the bill still resonated with me because of the chance I was given to go to community college while finishing up the requirements for my high school diploma. The following is an excerpt from my testimony before the Massachusetts State Legislature:

“Space doesn’t allow me to chronicle the events leading up to my definitive diagnosis of Infantile Autism at 17, but suffice it to say, the process eclipsed most of my last two years of high school. Thanks to the program at Santa Monica College, I was able to finish up the requirements for my high school diploma while taking college courses, and my class schedule reflected my unique portfolio of strengths and weaknesses. Indeed, I was in the Scholar’s Program taking advanced classes in English at the same time as I was being assessed for a learning disability and taking classes in remedial math…. Many factors have contributed to making me the person I am today, but a significant stage in my development was spurred by being exposed to college life even though I hadn’t finished high school.”

There was already a voluntary program with agreements between participating school districts and state colleges and universities to accommodate students whose learning challenges prevented them from completing high school. And my testimony probably held far less weight than the testimony of people who had participated in that program. However, I still felt a sense of accomplishment when the bill became law mandating and expanding the program statewide.

An area where I hope my advocacy proves effective is in helping alleviate the fear many parents express about what will happen to their autistic children after they’re gone. My mother had the exact same fear, and when she was diagnosed with lung cancer and given six months to a year to live, she did her best to plan for my future. Unfortunately, the disease progressed too quickly preventing my mom from doing much of anything. However, she had already laid the groundwork for my independence. In a way, she had been preparing me my entire life. Equally important, I wasn’t left to handle everything on my own.

The message I want to spread is most eloquently expressed by a member of the Jan/oansi, a group of hunter-gathers living in the Kalahari Desert. In his book Nobody’s Normal: How Culture Created the Stigma of Mental Illness, medical anthropologist Richard Roy Grinker tells the story of Geshe, a nine-year old boy who cannot speak and would probably be diagnosed with autism. When Dr. Grinker asked Geshe’s father if he worried about what would happen to their son after he and his wife passed away, the father gestured to his neighbors and said, “we’re all not going to die at once.”

Even though I live in a more individualistic culture than the Jan/oansi, I still benefited from a similar community spirit after my mother passed away. The village rallied around me.

Friends and family chipped in to assist with mundane tasks and to show me that there was a life after mom. In fact, this is when I was introduced to the LEND Program and a whole new world of disability advocacy. And in this world, I’ve found a sense of belonging and purpose where I’m always welcomed, and my perspective is valued. My presence is also treated as unremarkable. I’m just part of the furniture, just another seat at the table.

Gyasi Burks-Abbott, MS, is a writer, public speaker, and autism self-advocate who serves on the boards, committees, and commissions of several autism and disability organizations. He’s contributed to and written articles for anthologies, blogs, and journals. Gyasi’s autobiography, My Mother’s Apprentice: An Autistic’s Rites of Passage, is available on Amazon. He can be reached at burks1900@yahoo.com.