What started as a discussion about how to keep the people AHRC New York City supports and their families more connected amid the pandemic has turned into a popular virtual Friday Night Dance Party.

With the city on lockdown and summer camp closed, there were no opportunities for in-person dances, which were frequent at camp and quarterly in the city. Just before Easter in 2020, Joe Antcliff, aka JoeJoe the DJ and a Recreation Supervisor with AHRC NYC’s Camping and Recreation Department, reunited people with disabilities via Zoom. Many of the people AHRC NYC supports were unable to work or attend employment or day programs due to the pandemic’s restrictions. 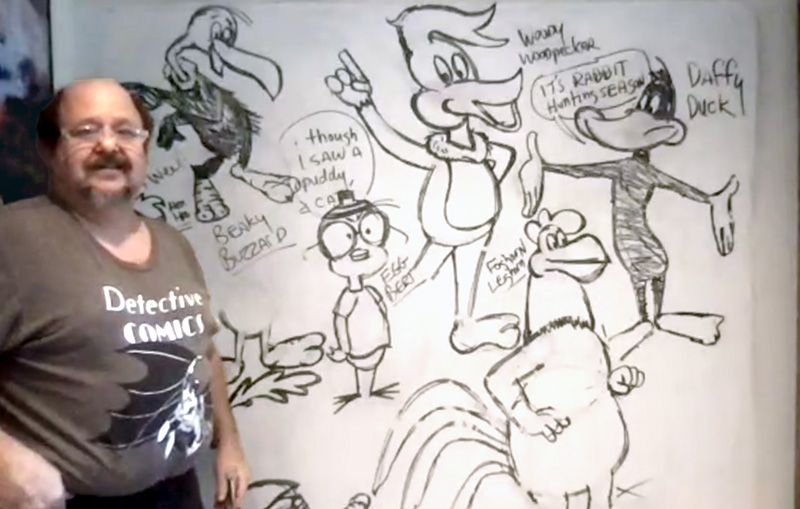 Alan Bessen, who has been volunteering for more than two years, enjoys teaching cartooning via Zoom

Creating a Sense of Belonging

“That’s when all the parents come out and dance with their sons and daughters. The parents wave,” Antcliff says. “It’s just a really nice atmosphere, so positive. We’ve created a sense of belonging.”

Having not seen one another in person for nearly two years, attendees can hardly contain their excitement. They are unmuted briefly at the start and the end of the evening. In between, there’s music, an ongoing chat, and Antcliff highlighting different participants via Zoom.

The nonstop chat is another form of connection.

“Ivanna, you are my friend forever,” Eddie writes.

Phone numbers are exchanged, friends greet one another. On this night, Ned gives an update on his uncle’s dog Levon: “He, unfortunately, didn’t make it.”

Despite being virtual on a computer, everyone can feel the energy, Antcliff says. “It has broken down that sense of isolation from the lockdown.”

Volunteer Shares Talent from Across the Country

Chloe Baker, a young singer and songwriter, had no connection to the disabilities field when she volunteered to conduct mock interviews with the people AHRC New York City supports. When she mentioned she was a singer, her role quickly changed. 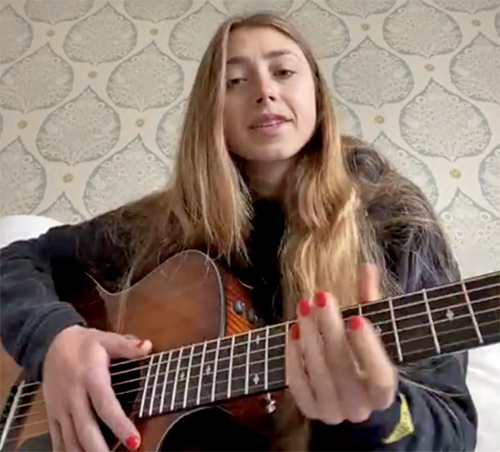 While she performs once per week via Zoom, Baker clearly is at ease with her guitar and piano or singing to instrumental versions of songs people request. Her audience is very accepting and doesn’t seem to notice that she was up early in her California hotel room, opposed to her music studio.

“Chloe is a good singer,” said Geriel, who attends the weekly session. “I like when she uses her instruments.”

“When they start dancing, that brings me so much joy,” Baker said. “When I find a song they connect with, it’s the best feeling.”

Baker finds herself raising awareness about mental health issues through her songs. “I know I can speak to this,” she said. “I really just want to make people feel empowered and not ashamed of parts of themselves they don’t like. Accepting those things are only going to make us stronger.”

Aimee, who enjoys listening to Baker’s music, has another benefit.

Volunteers From Near and Afar

Zoom, Facetime, and Microsoft Teams have become part of many nonprofits’ vocabulary in the last nearly two years.

“Technology had made a huge difference in our ability to recruit more virtual volunteers than we ever could have for in-person programs,” said Karen Zuckerman, Director of Volunteers and Corporate Engagement.

Currently, AHRC NYC has between 60-80 volunteers and programs. The programs range from mock job interviews with volunteers from NYU Law School, cooking with Common Threads, fitness classes, to wrestling talk groups, art classes, and much more. 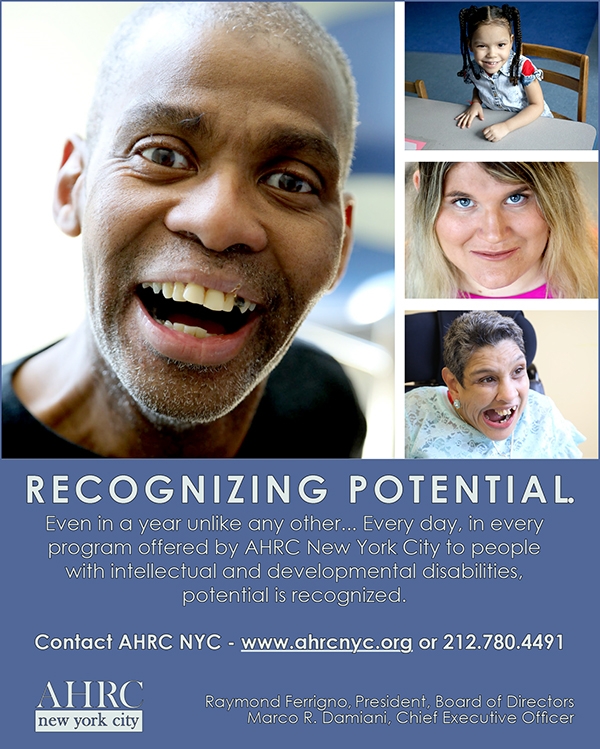 Teaching Cartooning in a Fun Way

It was Thanksgiving week and the theme in Alan Bessen’s cartooning session was “Any Bird but a Turkey.”

And there was Bessen drawing Tweety Bird, Woody Woodpecker, and Daffy Duck, to name a few. As he draws on his whiteboard from his Queens, N.Y., apartment, 22 individuals from AHRC NYC sketch from home via Zoom. Bessen has volunteered with AHRC NYC for about two-and-a-half years.

“We have those classic cartoon eyes, oval with dots in them,” he says, guiding his fellow artists.

Before the pandemic, Bessen would bring help sheets to guide the artists’ work on their cartooning exercise. “They would draw away and didn’t want to bother with me,” he said with a laugh. That changed once they transitioned to Zoom.

As a cartoonist, published illustrator, and teacher with 15 murals across NYC, Bessen’s passion for cartooning is clear as he works on subjects such as Any Bird but a Turkey. He tries to slow down, so the individuals participating via Zoom can follow along.

After a while, he checks on their progress – reviewing the likes of the Road Runner, Beaky Buzzard, and other feathered friends. AHRC NYC staff and Bessen praise the efforts.

Watching Bessen, it’s clear he was built for cartooning. “It’s the same thing I get out of teaching,” he said. “I love when I see people are into it like I’m into it. It helps me keep my enthusiasm on a completely pure level. It’s the love of doing it.”

Approximately 1 out of 54 children in the United States live with autism spectrum disorder (ASD).1 My son is one of those individuals, so I know firsthand some of the […]

This Is Me: Using a Personalized, Electronic Transition Tool to Support Self-Advocacy in Transition-Aged Young Adults