Sheltering at Home with My Brother Douglas During COVID-19

After the death of my mother I became my brother Douglas’ legal guardian and sole relative who would advocate for, protect and welcome him every weekend and holiday. The only time he was not able to come to me was when there was an epic snowstorm preventing travel, when I was sick, injured and or had surgery. We established a routine which included the usual, a fair amount of what is called activities of daily living skills, helping Douglas with shaving and laundry. 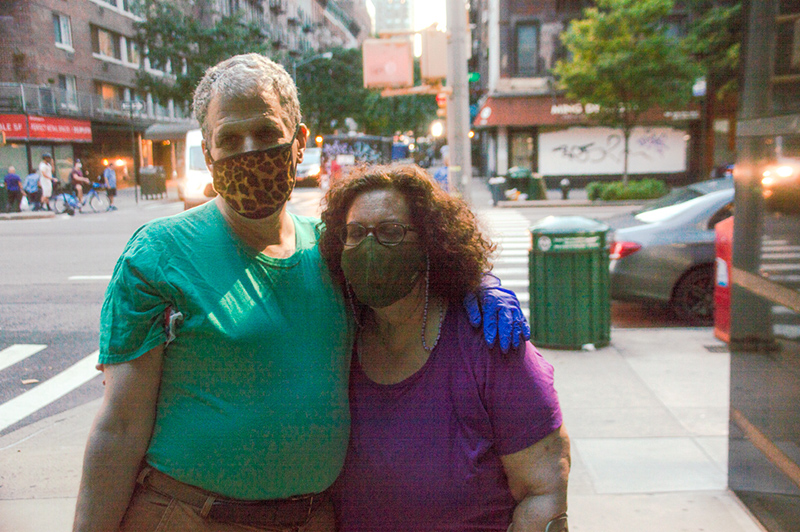 Gerri Zatlow with her brother Douglas

I have always been my younger brother’s protector, teacher, confidant, translator, speech assistant, direct support professional and above all, friend. This is the nature of our relationship. I am the older sister, he is the younger brother, he had and has a condition that makes it necessary for me to provide protection and support for him always. I desperately wanted a brother when I was a child and was very specific with my mother. I wanted a brother, not a sister. Since he was yearned for and happily arrived, playing that role was understood. I’d always expected to be the big sister, offering love and guidance, but expecting some reciprocity in return. Before Douglas was diagnosed with autism, I embraced being the big sis and dreamed of what our lives would be later. After acquiring a label that was frightening in 1965, I came to understand that my responsibilities would be much greater for my baby brother.

I was groomed from the time that I understood Douglas would require protection and direction for his entire life. As an adolescent it was a subtle awareness that showed me what might be needed. Douglas is younger than me and as a baby and toddler he seemed quite OK. To my parents, especially my mother who compared his milestones with mine, he was different. When diagnosed at age 5 with what was then called “Infantile Autism Childhood Schizophrenia,” my mother’s fears were realized. I was more afraid of his label.

As Douglas reached adolescence his behavior and peculiarities were obvious. Douglas was never going to be average, but he was loved without condition. Somehow our family managed through struggles, my parents’ divorce, and numerous challenges for us all. Disabilities in general, and autism in particular, can be hard on any marriage.

My mother’s obsession to protect Douglas from a disinterested and uncaring world culminated in the creation of an agency to serve adults with autism. I was co-opted into joining the endeavor when my whirlwind of a mom realized she couldn’t do it all by herself. My sibling persona was satisfied in this arena. I could see to it that people like my brother were cared for and happy.

On March 7, 2020 my brother came home for a weekend visit as usual. Since there were tidbits on the news that talked about a need at some point to perhaps clean or even close places, the thought never crossed my mind that it would happen. I spoke to staff at Douglas’ day program and group home and was told that the day program would not be open on Monday or Tuesday so that a thorough deep cleaning of the facility could take place. We decided that I would take Douglas back to his residence on Tuesday, and he would get an extra day and night with me.

On Monday an email showed up in my mailbox that basically said “Nobody Out/Nobody IN,” dictating the recommendations of OPWDD (The New York State Office for People With Developmental Disabilities) that agencies no longer allow consumers with their families to return to group homes. It also said that consumers IN residences would not be allowed to go outside to visit families, go on trips or in the community. This direction was to be for an indefinite period.

I always knew that someone would have to intervene on his behalf for his entire life. No problem. What was not prepared for was for Douglas to become a permanent resident. I was always glad to see him on weekends and holidays. Happy to spend vacation time together and when he was sick it was my job to keep him home with me until he was well. Since my mother’s death 7 years ago, Douglas has had episodes where he needed treatment for 3 weeks at a time. I stayed with him in the hospital when he needed surgery and took him home with me to recuperate. These instances were finite, with a beginning, a middle and an end.

Douglas has been with me for 6 and a half months. In the beginning he was confused, asking me if he couldn’t go back to the group home because he was bad. I told two of his favorite staff about this and both men called and assured Douglas he was missed, cared about and not banished because he was bad. They promised he’d come back soon and over the months he has been able to see them and other staff and consumers when they drive down to deliver his medication. We call his residence regularly and talk to consumers as well but at this point, I’m afraid Douglas will not want to return or will have trouble adjusting once he is able to go back.

After being told to STAY HOME, we remained in the apartment 95% of the time. My brother is used to getting out going places, doing things. I used to complain that he was a mall rat because residents frequented several malls in the NY/NJ/CT tri-state area. He thrives on activities and even our weekends were spent going out to do things.

All this came to a screeching halt with orders to shelter at home. I kept the news on most of the day. The sirens of ambulances were a constant sound. Douglas covered his ears every time the sound reached us. I talked to Douglas about COVID-19 daily warning him that whenever we did go out, we were to wear a mask and gloves.

The first two trips to the grocery store in the building were a disaster. Douglas kept pulling his mask below his chin or above his nose and peeled off the gloves to do what he always does, remove any price stickers on an item. We looked peculiar no doubt. I walk with a crutch in my left hand, but my right fist held fast to his pants as all 6 feet plus of him gyrated and screamed. I yelled “no mask no shopping!” he screeched back “I don’t care” before launching into his usual angry verbal tirade. People stare or try to avoid looking at us. The gaping of strangers used to mortify my mother, but as his sister it doesn’t bother me in the same way; one of the benefits of being a sister, not a mother. We don’t absorb that guilt in the same way. I wish I could stop it from happening, but I can’t and am not responsible for his explosions.

After many attempts to go out and do what we used to do with ease, there was an effort made to go to McDonald’s. In defiance, Douglas ripped off his mask and hurled it on the street and we marched home sans burgers. At last this seemed to mark a turning point. Douglas no longer objected to wearing a mask or gloves. Of course, he has thrown away a few pretty masks that were mine as a gesture of disdain for my being a bossy sister, but this time I am fighting to keep him safe and prevent his getting sick. At least our trips outside are not all disasters.

For the first time in a very long time I am scared for Douglas and for me. While my mother’s magnificent creation of a permanent place for people with autism could make a safe haven for him and others, it could neither predict nor stave off a once in a century pandemic.

Despite the duration of his time with me, I am grateful Douglas is home. Had he been at his residence when the lockdown went into effect and neither of us would have seen each other for months, we both would have been miserable. Having him in my domain gives me perhaps a false hope that I can keep him from becoming a statistic.

I have friends who have not been as lucky. A few have family members who came down with COVID-19 and suffered an array of consequences. For those who were unable to see their siblings or children for months it was torture. For those whose loving and vulnerable relatives had the virus it has been hell.

I have my share of sibling friends and have always turned to them for confirmation and support. It isn’t that we talk about handicapping conditions and tribulations with regularity. It’s more that we seem to be members of the same fraternity, though we never pledged. There is a profound level of comfort we have with each other, able to gain solace from our camaraderie. We are also able to discuss our darkest fears for our parents and siblings. This is something you cannot often do with “outsiders” who have had no initiation into our world. Some professionals are in this field and will tell you that they got into service delivery because of their siblings.

This latest crisis is no different. I rely on certain men and women to talk through the issues that the Coronavirus presents. While one friend has a brother living in Douglas’ group home, others have siblings who do not have autism. Their response is no different than mine when worrying about the future. As we are older and have watched our parents become ill and eventually pass away, we are filled with an overwhelming sense of responsibility. But this sense is diminished by an even stronger love for the brothers and sisters we were given.

I have been able to manage these stressful months with Douglas because I love him that much. There are no Direct Support Professionals to relieve me, no one to help with cooking, laundry or cleaning. As the sole source of recreation for the moment it is not out of need want to but because we are stuck at home together. As maddening as his rituals can be, as difficult as his behaviors may sometimes be, he is the brother I wanted and will love every day of my life.

How to Best Support Siblings of Individuals with ASD

Typically developing siblings of individuals with autism spectrum disorders (ASD) have a unique set of needs that often go overlooked and unnoticed. These needs are generally social and emotional in […]