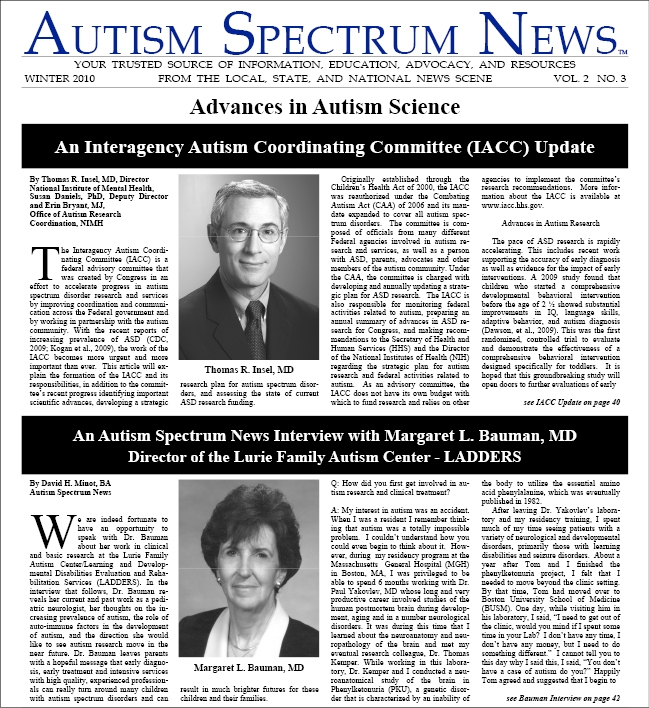 Articles in This Issue

The Very Early Identification of Autism – An Indispensable Goal

The clinical presentation which we call “autism” is now widely believed to be a condition caused my multiple factors with a very variable presentation. In the scientific literature it is frequently called “the autisms”. I would like to present a case which shows that progress in our understanding of autism will depend on our ability […]

How Do I Explain My Decision to Use Science-Based Treatments for Autism When Friends and Relatives Often Insist I Try Something New?

When friends or acquaintances hear about our experiences with autism, quite often the first thing that person asks is, “What is your opinion of vaccines?” Then, in many cases, that person asks if we have heard of or read anything about Jenny McCarthy and how she cured her son’s autism. The vaccine debate is an […]

Abnormal Micro-RNA: A Possible Cause of ASD and Schizophrenia

We are indeed fortunate to have an opportunity to speak with Dr. Bauman about her work in clinical and basic research at the Lurie Family Autism Center/Learning and Developmental Disabilities Evaluation and Rehabilitation Services (LADDERS). In the interview that follows, Dr. Bauman reveals her current and past work as a pediatric neurologist, her thoughts on […]

Recent evidence implicates the immune system in some cases of autism spectrum disorders. Researchers at the University of California, Davis, Johns Hopkins, and the Kennedy Krieger Institute have found that some mothers of children with autism produce autoantibodies that target the developing fetal brain (Braunschweig, Ashwood et al. 2007; Zimmerman, Connors et al. 2007; Croen, […]

"Supporting Girls and Women with Autism"